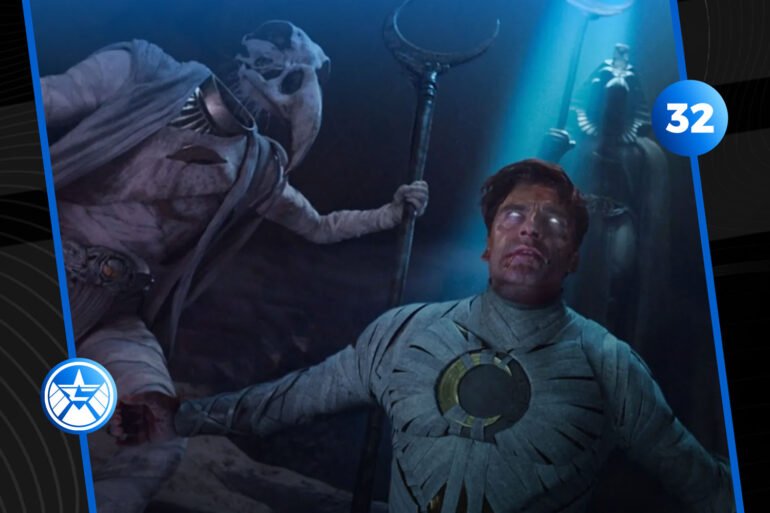 This week the Agents of Fandom are joined by Julia Skeggs of the Weighted Blanket Happy Hour podcast to break down episode 5 of Moon Knight. Since Julia deals with mental health issues during her podcast on a weekly basis, the Agents figured her insight into Marc’s mental health could be beneficial!

Julia actually brought much more to the table than mental health analysis! She is Agent Garrett’s boss and mentor at work, a former actor, and current resident of Chicago! This is relevant because much of Moon Knight episode 5 takes place in Chicago or a Chicago suburb, as evidenced by Marc’s Cub’s gear in his room, the mention of Milwaukee Ave, and the Chicago Putnam Institute.

Agents Garrett and TJ had a lot to say about where this episode ranked among all Marvel Disney+ episodes, and spoiler alert: it wasn’t toward the bottom! All 3 agents had nothing but positive sentiment for Oscar Isaac and his acting prowess, going as far as to say he should win an Emmy for his performance in the episode.

Next week is a massive week for the Agents of Fandom and Marvel fans alike. May finally signals the arrival of Doctor Strange in the Multiverse of Madness, which debuts one day after the Moon Knight episode 6 finale. Tune in to next Tuesday’s Multiverse of Madness primer episode, featuring our friend and comic expert Damon‘s comic corner- the most important comic issues you should read to prepare for the Doctor Strange sequel. Don’t forget to subscribe as there will be lots of incoming content this month!