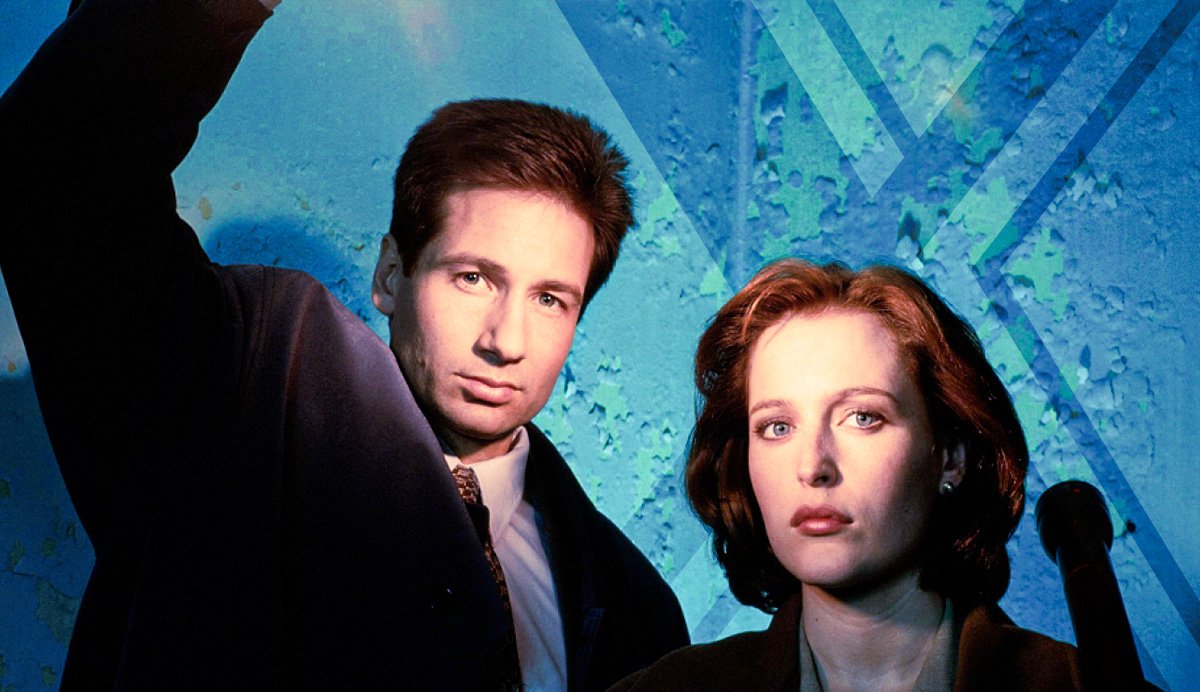 On September 10, 1993, Fox launched a television show that became an unprecedented worldwide phenomenon. The X-Files, created by former freelance journalist Chris Carter, found inspiration for screenwriting through shows he had grown up with, such as Kolchak: The Night Stalker and Alfred Hitchcock Presents. Apply current events with twists of science fiction and classic horror elements, throw in a couple of FBI agents, and boom, instant zeitgeist. Today, The X-Files is credited as one of the first prominent online fandoms. In nearly three decades, it has not only spawned spin-off series, but also fueled other cult hits like Bones and Supernatural.

Flashback to a dim basement office at the J. Edgar building in DC, housing one Special Agent Fox Mulder (David Duchovny; Twin Peaks, Californication). Mulder, a highly-regarded criminal behavioral specialist, harbors some questionable extracurricular endeavors involving wild conspiracies within the government. After discovering unsolved cases of the paranormal realm dating back to the 1930s, these endeavors heightened. As an agent with his credentials, he was permitted to investigate similar cases that no one else would take on.

A reluctant, but determined, Dana Scully (Gillian Anderson; The Fall, Bleak House) enters and meets her FBI partner for the first time. As a medical doctor fresh from Quantico, her position is to debunk Mulder's work, applying her scientific sensibilities towards their findings. This is where the original storyline, also known as the mythology arc, begins. The first case Mulder presents to Scully takes place in Oregon involving the kidnapping of students. However, these are not just ordinary kidnappings, but abductions by what Mulder believes to be an alien source. Naturally, Scully raises skepticism and disagrees with Mulder's theory.

A CLASHING OF THE MINDS

One unusual aspect of The X-Files is the characterization of Mulder and Scully themselves. In the past, women were viewed as more rigid in their skepticism, while men were noted as far less. Sometimes even domineering in their beliefs. Carter wanted to change up this gender ‘norm'. Mulder's specialty earned his reputation for being “spooky,” as it relates to his ability to follow behavioral patterns during criminal investigations. With their unique facilities, they possess the abilities to solve difficult cases with productive results. More importantly, we get to witness the evolution of Mulder and Scully's relationship, both professional and personal.

This evolution invokes varying degrees of emotions with fans. Many “ship” these agents simply as platonic partners, while others, more romantically. If there are any other exemplary non-couple couples who exude the same warmth, compassion, and dedication for their work and one another, I have yet to see it. Naturally, working in close proximity for many years ensures discourse. These scenes sometimes play out in humorous ways, giving the show a little levity from the usual austerity. It also showcases the acting abilities of Duchovny and Anderson and adds more relatable characteristics to our agents.

The unsurprising result of having a smart, strong, female scientist on-screen could only lead to an uprising of smart, strong females in STEM. Many women have credited the show for catalyzing their interests in scientific careers after seeing a positive role model like Dana Scully immortalized on television. Although there had been female doctors on television prior to The X-Files, Scully embodies numerous characteristics, oscillating between well-rounded strength and vulnerability. She uses her intuition to help victims, and sometimes even suspects, in a way most agents wouldn't have in a male dominated field. This is equally important as relating her knowledge to the cases, using behavioral sciences along with her partner to build upon his profiling.

THE TRUTH IS OUT THERE

In the mid-90s, and prior, representation, whether racial, social, and even with regards to certain disabilities, often conveyed inaccuracies in entertainment. In The X-Files, there is an extreme desire to represent different cultures and even references to racism and how it affects both suspects and victims. The X-Files isn't immune to discrepancy, one being cases regarding individuals or suspects with autism. While there are quite a few spectrum aspects that pave the way for savant status, this isn't always the case. Even so, the intent for inclusion is met with natural curiosity and sympathetic tones rather than malice. In retrospect, these controversies actually conjure countless comparisons to today's standards of representation.

Not only are social issues covered, but climate and environmental conflicts run as common themes in many episodes, such as “Darkness Falls” and “The Host” in earlier seasons. The writers never shied away from bringing up controversial topics. (Networks temporarily barred Season 4, Episode 2 “Home” from syndication for being “too scary” and reflected sensitive themes, including incest). Cloning, as an example, is often brought up in the form of science fiction, but also during this time, scientists in real life began animal cloning. Dolly the sheep, created from a somatic cell and egg, took claim as the first cloned mammal in 1996. In turn, this news introduced a new type of technology as a reference. Again, tying these topics to discussions we can have today makes the show still relevant.

Whether fans began their watch in the first run nearly three decades ago, during the FX syndication, or even later, the appreciation for this show never fully ceased, even after the initial run before the rebooted seasons. Numerous podcasts, blogs, and websites dedicate themselves strictly to The X-Files content in both nostalgia and modern nuances. While some episodes cling to dated reasoning, the show still accomplishes in resonating with audiences worldwide. On Twitter, many fans, myself included, congregate to discuss (okay, riff) the show every Monday. Recently, a rewatch of “The Host” (Season 2, Episode 2

) compelled tweets and conversations surrounding climate change, an ongoing discussion since the 1960s.

Many other discussions regarding government conspiracies and occurrences arose. For one example, the correlation between the handling of an alien virus and that of COVID-19. It's not all seriousness, though! Episodes like “Small Potatoes,” “Bad Blood,” and “Jose Chung's ‘From Outer Space'” became fan favorites for their humorous scenes and notable guest appearances. The X-Files now streams on both Hulu and FreeVee (with ads).

For a deeper look into women in male dominated workplaces, check out Agent Lily Sapien's editorial on Think Like a Man.