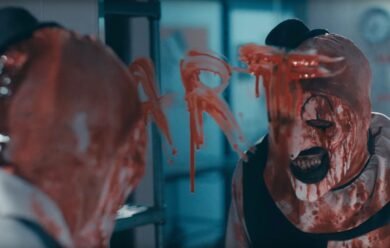 In the nine-decade history of the Oscars, only 18 horror movies have found a gold statue for anything. The phantasmagorical bloodletting Terrifier 2 would like to be number 19—sort of.

For horror fandoms and enthusiasts, Terrifier 2 coming to theaters was a glorious moment of applause soaked in blood. For cinephiles who consider diving into the deep end of the proverbial Crystal Lake, Art the Clown is an acquired taste. Because if you’re not ready for what this film has to offer, you will gag and hurl like a frat boy on rush week.

So, for all Art’s earnest effort to make audiences’ butts pucker and lose the gallon of popcorn they just ingested, Dark Age Cinema has pushed this pukefest through to the Academy of Motion Picture Arts and Sciences (AMPAS).

And that bloodbath isn’t even the red-band trailer. Oscar, that is for your consideration.

Terrifier 2 is Not Clowning Around

This happened. Terrifier 2 has been offered to the Oscars–and they accepted it. That means some octogenarian who just ate his daily Cream of Wheat will spew oatmeal, a demonic possession style. Someone at AMPAS must watch this, to be fair.

If you’re into horror, you know BloodyDisgusting.com. Thanks to Brad Miska’s website, Terrifier 2 is nationwide. And now, this film was sent to AMPAS with Miska’s tongue firmly planted in cheek. However, he had a method to his madness, as he shared on the site.

No, it will never actually happen. Yes, it’s a total goof. But you know what? The thought of having members of the Academy endure an extreme unrated horror movie that they would otherwise consider beneath them? That’s just too hilarious of an opportunity to pass up.

So, we’re listening to the fans. Everything about Terrifier 2 has been fan-driven every step of the way, and if you want to have a little more fun with this one, we’re happy to oblige.

If someone knows Miska, buy him a beer for the rest of us. That act of defiance and rigid middle finger to Hollywood deserves the highest of fives and a tall boy from deep in the ice well.

The “Art” of Terrifier 2

Now, if you haven’t seen this, it is not an easy film to watch. In fact, it’s damn near challenging. If you search long enough online, you will see how people have acted since seeing this hemophiliac smorgasbord. There have been countless acts of puking, fainting, crying, and moaning in pain while patrons are in their seats.

And the film’s writer and director, Damien Leone, is here for it!

Listen, I would have loved to have a couple of walk-outs, I think that’s sort of a badge of honor because it is an intense movie…I don’t want people fainting, getting hurt during the movie. But it’s surreal.

Art the Clown (David Howard Thornton) has no off switch in this repulsively captivating sequel. Once dude is on a tear, he is shredding everything–and everyone–he can find. Why? For sh*ts and giggles. Some clowns juggle. Others honk silly horns. Art emulsifies his victims into a delicate Chateaubriand sauce.

You would think every way to torture and maim a person has been done in the movies, yet, Damien Leone finds masterclass fashions to horrify you and make you wish Art’s switch had a dimmer. Damn, this film is unapologetically fierce and gruesome.

If you want to back this funny, take Miska’s direction:

Tag @TheAcademy on Twitter with the hashtag #OscarsForArt to take part in our fan-driven – and completely and utterly not serious at all – Oscar campaign for Terrifier 2! Let’s make some more noise. Let’s see how many members of the Academy we can get to pay attention to a horror movie that precisely none of them would ever watch on their own.