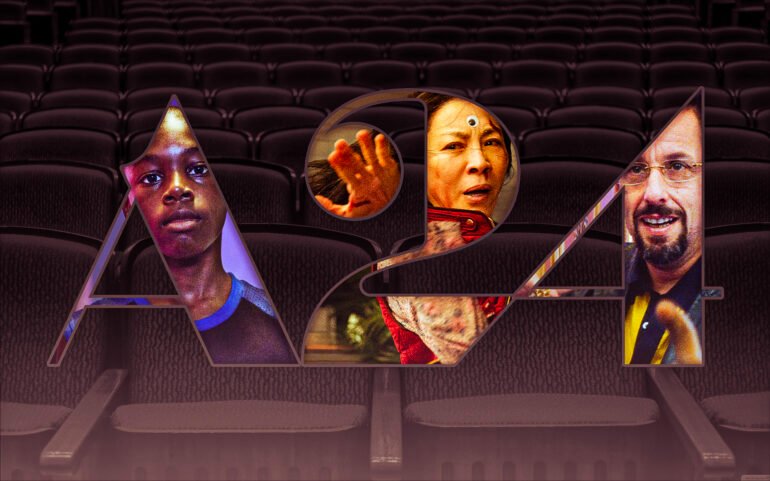 A Booming Box Office for A24

Film distribution company A24 is having a stellar run at the box office right now with the theatrical releases of After Yang, X, and most importantly, their hit Everything Everywhere All At Once. With a cumulative box office total of just shy of $67 million and 14 films yet to release this year, the indie-based distribution company is experiencing its shining moment in the spotlight, but how long can it stay there?

A24 has long been known as the distribution company behind cult classics like Uncut Gems, Hereditary, and Midsommar as well as the Academy Award-winning Moonlight, but their cultural and financial success has come in fits and bouts over the years. The 10-year-old entertainment company generally focuses on films of the idiosyncratic nature such as Swiss Army Man, the film about a man (Paul Dano) saving himself from a deserted island via riding a farting corpse (Daniel Radcliffe) to safety. Just slightly more odd than your usual movie, even for an indie production. Yet they haven’t changed up their strategy in 2022. Their filmography is of course filled with more personal stories of things such as grief and love like this year’s After Yang starring Colin Farrell and Jodie Turner-Smith co-produced by Showtime. But that hasn’t slowed down their ability to make left-of-center hits that are thriving at the box office. X, their first slasher horror film, premiered earlier this year in March and was met with excellent reception in a time when not everyone wants to get out to the cinema. Raking in just over $13 million worldwide and already set to have a prequel, A24 continues to be able to find their niche at the ever-overstuffed box office. Along those lines, the life-changing (and I’m not kidding here…) film in Everything Everywhere All At Once has already become their 4th highest-grossing movie of all time and is challenging my personal favorite A24 flick Uncut Gems for the highest-grossing domestic run with $48.6 million so far. In a world in which it is taking production companies millions of dollars and hundreds of person-hours in advertising to get audiences out to the box office, A24 has found continued success.

Can A24 Keep Doing Their Thing?

While success hasn’t been easy to find for other studios on the bounce-back from lockdowns across the world, A24 is shining in the success spotlight. But is it something they can remain under or will they sweat their way to stage-left as the big blockbusters of summer start to fill up theaters nationwide? Massive tentpole franchise films like Doctor Strange in the Multiverse of Madness currently dominate the box office with even more on the way this summer. Not so great news for the pseudo-indie A24 and their smaller budget films. But their original storytelling and off-kilter movies could prove to be just what moviegoers are looking for. In a world of interconnected universes in the Marvel Cinematic Universe and sequels, prequels, and spinoffs, the opportunity to tell one-and-done stories is something that is as attractive as ever. The ability to take full advantage of such a niche market with the massive world that is movies could offer A24 the chance to hold onto their cozy crown of box office success. My bet is they fully recognize this special spot they are in and continue to dig into it even more. That is, if I was a betting man.

The Future Is More Than Promising

This weekend A24 releases the new Alex Garland (Ex Machina & Annihilation) film Men, a psychological thriller starring Academy Award-nominated Jessie Buckley and the always excellent Rory Kinnear, who you most likely know as Tanner from the 007 franchise. 4 weeks later they are releasing a movie based on a 12-year-old Youtube video about a shell named Marcel. Naturally, the film is titled Marcel The Shell With Shoes On. August brings the murder mystery thriller Bodies Bodies Bodies with Pete Davidson, Maria Baklova, and Lee Pace. And these don’t even cover the other 11 films set to release this year from filmmakers like Ari Aster (Hereditary & Midsommar), Kelly Reichardt (First Cow), Darren Aronofsky (Requiem For A Dream), and a directorial debut from Jesse Eisenberg (The Social Network). A stacked slate to say the least. I’m especially excited for Disappointment Blvd. from Ari Aster starring Joaquin Phoenix. Indie distribution company you say? Doesn’t feel like it with names like that… Their past and present success at the box office has given A24 the unique ability to continue to invest more heavily not only in auteurs and recognizable casts but to grow the hype of their “brand” and even offer a special membership program called All Access A24 that gives members access to exclusive merchandise. A24 is slowly turning into a pure brand in movie making, something no studio has yet to do. Some would even say its a vibe.

Blockbusters and massive IP have sustained the box office during the COVID pandemic and I think I can say we are all collectively grateful, but the era of smaller films is back. Auteurs. Smaller budgets. More personal storytelling. A movie era that was once thought as gone and dusted appears to be making a surge back to center stage and A24 is at the helm of the movement. Whether you buy the hype of the brand itself or just enjoy the movies they distribute, A24 is sure to be the talk of 2022.

Curious if you should dive into an A24 flick? Check out our review of the slasher movie X.