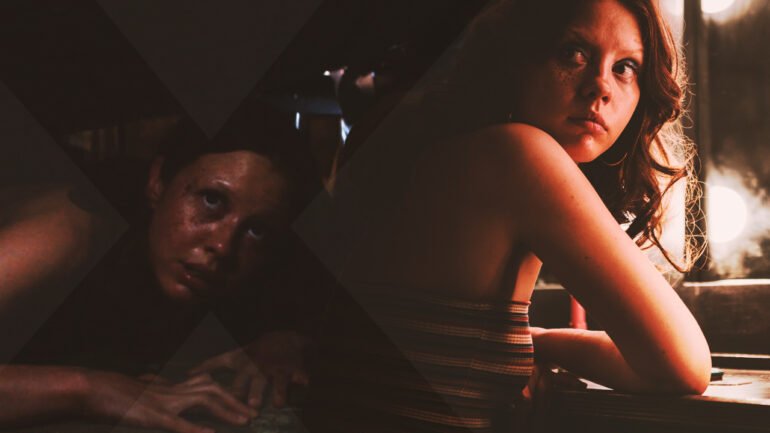 X Review: The Power of Cliche in Classic Horror Throwbacks

During the pending release of new slasher movies, there lies an intrepid wait for those among us who grew up on movies such as The Texas Chainsaw Massacre, Friday the 13th, and the long-loved classic, Psycho. Ti West’s X was no different, as we were anxious to see more horror back in movie theaters after the latest installment of Scream. Unlike Scream (2022), however, this is just the beginning, and our remaining scream queen isn’t one originally born of innocence, nor does she pretend to be anything other than the badass she is.

Our opening sequence of X opens in an aftermath of extreme violence as police officers investigate a grisly scene. The setting is a vintage farmhouse even by the standards of 1978. Whether or not the term “cottagecore horror” exists thus far, it is reminiscent of other movies such as 2019’s Midsommar or 2015’s The VVitch– where the cinematography doesn’t rely heavily on orchestral background music throughout. Nature (like singing cicadas, for example) serves as a soundtrack, creating a calm ambiance between the bloody scene and the surrounding environment. Upon entering the house, the television is still playing, left on a channel featuring a televangelist preaching about what else…the trappings of Satan on American youth.

I Refuse to Accept a Life I Do Not Deserve

Flashback to twenty-four hours earlier: our horror darling, Mia Goth as the “take no shit” Maxine, gives herself a pep talk in the dressing room of her work prior to the road trip to film a “cinematic porno” as described during one point of the movie by one of the filmmakers, RJ (Owen Campbell; The Americans). The topless bar, dubbed Bayou Burlesque, also employs Bobby-Lynn, portrayed by the effervescent Brittany Snow, who, much like Maxine, awaits her big Hollywood break. The title of the bar represents an ironic misnomer- given the fact it serves as an oasis amidst a large slaughterhouse, rather than the swampy imagery we see later during the movie. Along for the ride are fellow filmmaker/executive producer Wayne (Martin Henderson; The Ring, The Strangers 2: Prey at Night) and Vietnam veteran/actor playing opposite Bobby-Lynn, Jackson (Kid Cudi).

Nothing Good Ever Happens at the Gas Station in the Boonies

Let’s cut to the “middle of nowhere” gas station cliche. This writer has often said nothing good happens where there’s a gas station cliche (or in a movie that has one). While this film has a few references to different horror-cliche moments, they’re expected. Cliche brings us back to the classic first cinematic memories previously experienced despite the genre. There are so many instances to love cliche- especially when they are played to the right audience in the right way. Cliches are a nod to a passage of time we wish to relive once again as the first time. During this scene, Lorraine, the Scream (2022) queen herself, seems to be the antithesis of both Maxine and Bobby-Lynn. That said, as we discover in later scenes, there is more than meets the eye beyond the usual “good girl” trope. In X, she assists her boyfriend, RJ, as the boom mic operator and equipment manager.

On the way to the gang’s filming location, carnage ensues in a gruesome tractor collision involving cattle, foretelling precisely what is to come. Oddly enough, Maxine admits she cannot stand the sight of blood. Once they do make their way to their destination, Wayne checks in at the farmhouse with the elderly boarding house owner, Howard (Stephen Ure), who greets him with what he tells Wayne is an unloaded shotgun, thinking he’s an officer from the county. Howard takes Wayne to the boarding house, where the gang will stay and make their film. Upon realizing there are more tenants than he realizes, Howard warns them about his wife and her tendency to get confused at night, but not for the reasons we believe.

The filming of the sex scene between Bobby-Lynn and Jackson is as cheesy and cliche as one can imagine, but the more high tension moment during this segment occurs when Maxine leaves the boarding house to explore the surroundings. She finds a pond and dives off the dock, not realizing she is being watched by not only a hungry crocodile but also Howard’s wife, Pearl (deliciously played by Mia Goth in such heavy makeup prosthetics her own costars had no idea it was her under it all ). The crocodile stalks Maxine through the water as she’s swimming back towards the dock before leaping out of harm’s way, unbeknownst to her. She remains unaware of being followed at all until she reaches the outskirts of the boarding house and Pearl beckons Maxine to join her in the farmhouse for lemonade. The powerful parallel between this scene and the one taking place back at the boarding house is between these leading ladies of two vastly different movies. Back at the boarding house, Bobby-Lynn is acting as the farmer’s daughter who brings Jackson inside as his car is broken down right outside (convenient, right?), as Pearl laments her youth to Maxine as she points out photos on the wall, one from when Pearl and Howard were married so many years ago. Pearl sees something special in Maxine that she once had, as dreams of being a dancer before the first World War had taken everything from her.

When the Sun Goes Down…

As daylight starts to ebb, Maxine returns to the boarding house to get ready for her scene with Jackson in the barn, during which Pearl watches through the window and imagines Maxine looking back at her, as if flashing back to the days she was not only young and beautiful but desirable as well. She puts on makeup (similar to the blue shadow Maxine wears) and a dress more than likely acquired during her younger years as a dancer. Then there’s a cut to creepy dolls- a nod to, well, take your pick of creepy dolls in horror. Pearl returns home to Howard, as Bobby-Lynn sings “Landslide” back in the boarding house living room. The two living room scenes give us yet another parallel, as Pearl begs to be the object of Howard’s desires again, and Bobby-Lynn describes the outdated tradition of love as Lorraine sees it. Lorraine surprises everyone by wanting a scene in the movie (with Jackson, to be specific) to be more than someone just carrying equipment. RJ hesitates and, suddenly, the double standard of “being free” with sex works for some, but not for him.

RJ is the first victim to fall into Pearl’s killer’s clutches. He believed a drive would soothe the sorrows of his girlfriend being bodily involved with another man on film. Instead, he meets Pearl outside of his truck, where she tries to seduce him and fails. She then stabs him in the neck- naturally. And repeatedly. As the cast is picked off one by one, with the exception of Lorraine, whom Howard initially locks in the basement of the farmhouse until she is released by Maxine and eventually killed by Pearl. In the end, when Pearl realizes Maxine is going to kill her, she decides she’s nothing special after all and tries to shoot her, but her plan backfires as the rifle (our “unloaded” weapon, per Howard) knocks Pearl back off the porch. This hallway face-off can also be seen in movies like Texas Chainsaw Massacre and even Scream (1996). Throughout the nighttime scene, there are references to other movies, a personal favorite being when Jackson finds a half-submerged car in the pond, an obvious yet delightful nod to Hitchcock’s 1960s horror classic, Psycho, and the first-person point of view shot of Pearl entering Maxine’s room.

While the execution of X in all its cliched glory can be simply described as a movie within a movie (or pornography within a movie, as it were) there is a hidden cleverness not as discernable as the Scream franchise, making it more open for interpretation. Pearl herself isn’t simply driven by an eagerness to kill. Instead, satisfaction or even a thrill might be what she seeks to make her feel alive. But underneath is a woman who, more than likely, was forced to grow up at a young age and forget her girlish dreams. This seems more evident after viewing the post-credit scene that follows her past, which utilizes technicolor in a dreamlike stage, much like The Wizard of Oz, though her exact breaking point remains to be seen. There are talks of expanding the Pearl universe with a prequel, then ending in a third movie with events following X and hopefully Maxine’s journey of being the star she wishes to be. When she repeats she “will not accept a life I do not desire,” she also does not accept death before she fulfills her dreams. As West himself hinted at a sequel during an interview prior to the SXSW screening, stating, “You can’t make a slasher movie without a bunch of sequels.” This is true as the thrill of knowing more behind Pearl’s murderous motivations will make this a new franchise to anticipate.

“If people wonder what the backstory to X is, well, I know all of it,”

Horror films that expand past the usual jump scare, which are done to death, no pun intended, fuel our adrenaline rush, but they also have proven to do so much more. They open portals to view human nature in its primal form, the things we do when we or our way of life are threatened. X is beautifully made in such a way where we think beyond what we see on screen with not-so-subtle examples of how we view old age, and how old age views youth (as that old adage remarks “youth is wasted on the young”). In Pearl, Maxine sees life not lived, and death itself. Age is a disease that no one is immune from, and perhaps Maxine sees Pearl as the epitome of her own dreams not being lived. She represents a bigger threat to more than just her physical life. In the end, it’s not death itself that is feared, but everything that dies along with it.

X Review: The Power of Cliche in Classic Horror Throwbacks
9

Looking for more carnage? The Northman is now available on Video on Demand! Be sure to check out Ethan’s review before diving in. The Northman Review: A Bloodthirsty Beast Of A Film