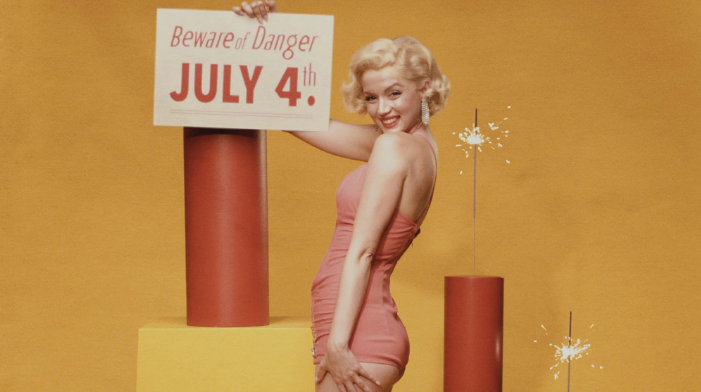 Maybe not July 4, but danger is coming! (Source: Netflix/Plan B Entertainment)

Welp, gentlemen may prefer blondes, but the Motion Picture Association of America (MPAA) doesn't prefer the Marilyn Monroe biopic starring Ana de Armas. Blonde, the long-awaited and highly anticipated Netflix film, takes an introspective look at Hollywood's most famous sex symbol the industry has ever had.

Evidently, some hamstrung prudes sit on the MPAA board who feel the smoldering portrayal will cause dirty old men (or women, if that's their thing) to look a little too long. To wit, Ana de Armas went off in L'Officeil about the rating and rancor about the film.

So, what do you think? Director Andrew Dominik has a particular style of making a film that captivates the attention. If you have seen Killing Them Softly or The Assassination of Jesse James by the Coward Robert Ford, you know the guy's writing can draw you in like the Death Star's tractor beam on an X-Wing.

The trailer is magnetic. Ana de Armas is transformative. And the Hollywood rating is one of those WTF moments, like when Shakespeare in Love throttled Saving friggin' Private Ryan for Best Picture. Blonde is NC-17 for what is considered “some strong sexual content.”

This is a historical precedent–Blonde has been given the first NC-17 rating for any streamer-exclusive film. People under 18 can slide in for R-rated cinema to enjoy a risque show. For this, if they are under 17, it ain't gonna happen. Why? If you ask Ana de Armas, hypocrisy and lunacy.

I didn't understand why that happened. I can tell you a number of shows or movies that are way more explicit with a lot more sexual content than ‘Blonde.' But to tell this story it is important to show all these moments in Marilyn's life that made her end up the way that she did. It needed to be explained. Everyone [in the cast] knew we had to go to uncomfortable places. I wasn't the only one.

Much Longer Than a “Seven Year Itch”

This is Ana de Armas' first starring role, and the woman will go straight to the Academy Awards with an inevitable nomination. However, MPAA gave the movie a Scarlet Letter, which seems slightly off.

Oh, the literary pun there harkens back to 1990 when NC-17 used to be the mouth-gaffed, porn-stained “X.” Now, you understand why the would-be Norma Jeane Baker is a little terse. Here are some other reasons:

For those who have read Joyce Carol Oates' 700-page novel, there is no way her words, or Dominik's adaptation, comes even close to the trash heap smut of Fifty Shades of Gray. (Much less those absurd three movies.) In fact, during a ScreenDaily interview, the Netflix director had a colorful statement that could have been called NC-17 on its own.

If the audience doesn't like it, that's the effing audience's problem. It's not running for public office. It's an NC-17 movie about Marilyn Monroe, it's kind of what you want, right? I want to go and see the NC-17 version of the Marilyn Monroe story.

Rated R or NC-17, Ana de Armas is alarmingly hypnotic in that trailer. And, if those two minutes are an iota of the metamorphosis from her acting, she will be on the runway off Hollywood and Highland in early 2023. You heard it here first.

Blonde will bring its coquettish trance to screens on September 28. And many people above 17 will be watching Netflix…and chill.