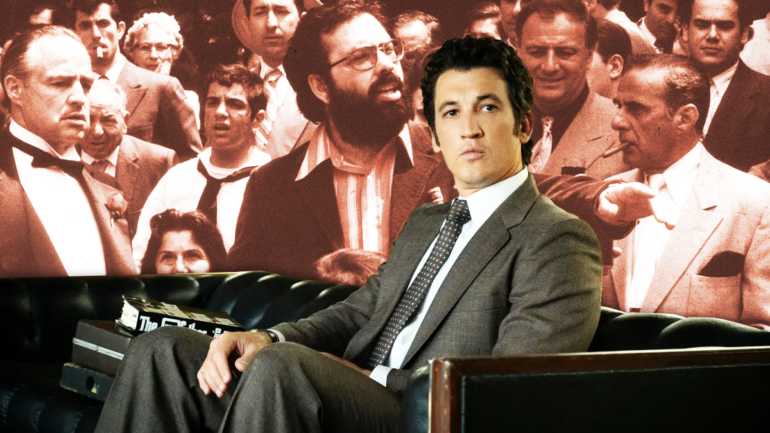 For all its Oscars, acclaim, and legacy, the fact is The Godfather should have been a disaster. Known today as one of cinema’s masterpieces launching a trilogy that earned nine Oscars, no one knew what to expect when the cameras began rolling in 1971. But creating an epic classic was not anticipated. Despite all of its production issues, it created screen magic hailed as an instant classic winning three Oscars including Best Picture. More importantly, it changed everything about cinema.

The Offer is a biographical drama limited series on Paramount + about the development and production of Francis Ford Coppola’s landmark New York City gangster film – The Godfather. This series is a meditation on the agonizing creative process, the late-60s and early-70s America, writing and filmmaking, and the struggle between the artists and the accountants. It uses the behind-the-scenes conflicts that eventually produced one of the greatest films of all time as the vehicle for exploring those thematic details.

Inexperienced Producer Albert Ruddy approaches the legendary head of Paramount Studios Robert Evans and receives his first assignment. The adaptation of the bestselling book by Mario Puzo to be directed by Francis Ford Coppola. Member of the real New York mafia and creator of the Italian-American Civil rights league, Joe Columbo believes the story does more harm than good for the Italian community and wants to put a stop to The Godfather from being made. Miles Teller is tremendous as Al Ruddy and though Giovanni Ribisi has been receiving backlash for his portrayal of an Italian crime boss, the actor respects the material enough to give his best performance.

A true underdog story as producer Albert Ruddy has to go through a hundred different obstacles to make a film that can stand the test of time. Every moment he wins a battle another obstacle gets in the way to prevent this film from being made. The scenes with Coppola and Mario Puzo are gripping as they both make the process of re-writing the book to script feel exhausting and frustrating.

“What’s the point of hiring me to direct this film when you are not allowing me to bring my vision to the screen!” remarks Coppola. Francis cares about the quality of storytelling by making it multi-layered with characters having to go through their own battles and the producers just want a stereotypical gangster film. The show captures the inner workings of all the bureaucracy that goes on in a studio. It’s a business where producers, accountants, and presidents are hungry for money and don’t focus on the artistic side of the craft. Nobody has the patience to even read the script in its entirety. Take the bad reviews with a grain of salt. I highly recommend you watch The Offer for yourself to formulate your own conclusions. The Godfather has always been an iconic piece of history, so a series about how the film came to be was definitely worth the long wait.

CHECK OUT THE AGENTS OF FANDOM ON APPLE, SPOTIFY, YOUTUBE, OR WHEREVER YOU GET YOUR PODCASTS.