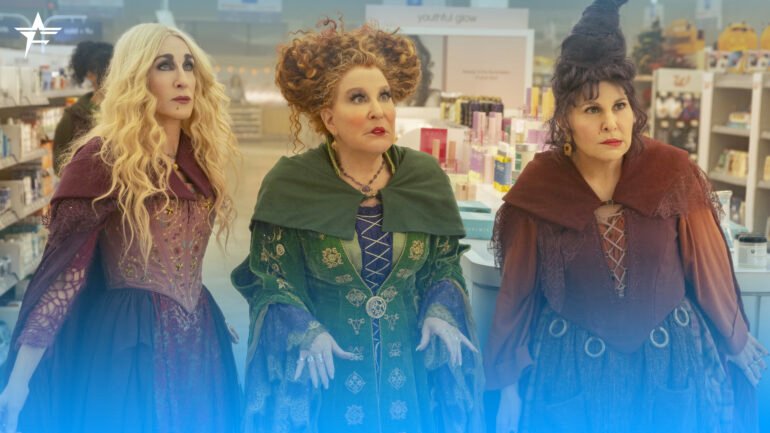 Hocus Pocus 2 Review – The Witches are Back!

It’s been nearly thirty years since Max lit the Black Flame candle and introduced us to the famous witchy trio in the 1993 Disney classic, Hocus Pocus. Get ready to board your broomsticks again and revisit Salem because the Sanderson sisters are back in Hocus Pocus 2! While the overall premise remains fairly the same–with a team of teens vowing to put a stop to the Sandersons’ prowling around Salem–don’t expect a recycled plot copied from the first movie. Hocus Pocus 2 casts the powerful spell of nostalgia, adding more contemporary themes. This provides a refreshing story line that caters to both older (especially those of us who cling to the original every year along with our pumpkin spice lattes) and younger generations alike.

HOCUS POCUS… A SHIFT IN FOCUS

Prepare for a little more backstory on Winifred, Sarah, and Mary Sanderson (Bette Midler, Sarah Jessica Parker, and Kathy Najimy, respectively) in Hocus Pocus 2. Audiences will love this deeper dive into their magical history, without deviating from the witches we’ve come to know and love from the first film. The introduction of new characters includes Gilbert (Sam Richardson), who provides comedic relief as the Sanderson trove of knowledge and the current museum curator. Throughout the movie, rather than continuing a sole search for immortality, the sisters’ interests shift towards strengthening their magic. The sisters meet their match when they run into Becca and Izzy (Whitney Peak and Belissa Escobedo). Along with their other best friend, Cassie (Lilia Buckingham), they work together to defeat the sisters before dawn on All Hallow’s Eve.

The sisters somewhat abandon their child-eating desires as they find they have more at stake (pun not intended) in Hocus Pocus 2. Additional truths reveal themselves in this well-done sequel, but none more important than the message of what absolute power entails. Even the mysterious Book of Spells plays a larger part from the original. Expect appearances from players past, such as Billy Butcherson, portrayed again by Doug Jones. Of course, count on a couple of numbers that showcase the Sanderson’s musically hypnotic talent. Admittedly, as delightfully campy as these scenes are, it’s hard not to dance in your seat or keep the songs from playing in your head in a constant loop.

Hocus Pocus 2 delivers everything we love from the first film, with varying ranges of heart and humor, and every scene more exciting than the last. Be sure to catch the post credit scene, too!

With the revival of past horror franchises like Halloween, there is no surprise that Disney wanted to reunite our sisters again just in time for Fall. Hocus Pocus 2 makes a great addition to any annual spooky season repertoire! Add it to yours on September 30, streaming only on Disney+.