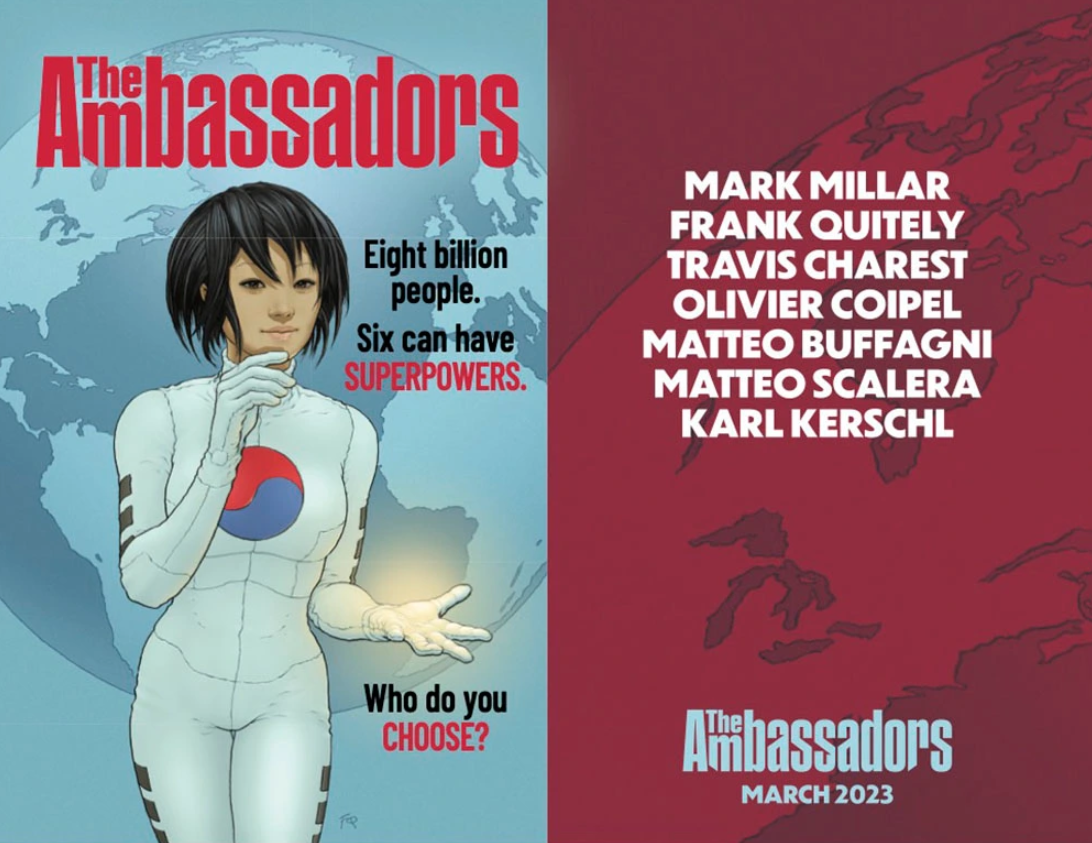 If you love the mercurial messages that hail from comics, then Mark Millar is no stranger to your senses or collection. The whimsical mind behind Kick-Ass, Jupiter's Legacy, Kingsman, and a fave of many DC stans Superman: Red Son is back with what could be his most fascinating comic work yet, “The Ambassadors.”

In what is being described as “Willy Wonka with Superpowers,” Mark Millar takes us to South Korea, where a megalomaniacal billionaire has constructed the world's first superhuman headquarters. What good is that if you have no one to share it with? Not good at all, so the owner of this heroic hill decides to launch a global competition. Only six fortunate people will get “the golden ticket” and win super-human powers.

That could be the end of the story. Is anyone onboard yet? Hells yeah!

Does This Make Image Comics No. 3?

Marvel Studios is so far ahead of any other comic publisher in the CBM space that not even Superman could see their taillights in the distance. However, in the world of comics, there is more of a tug-of-war for supremacy.

Marvel and DC have created perennial characters, each with mesmerizing artwork from iconic artists and storytellers. If you like detailed plots and nuance, Marvel is usually where you lean. However, if multi-layered character arcs are your thing, so is DC.

And then, way off in the distance are “the others.” Several comic fans consider them “wannabe publishers” but when you consider what they have done and brought nerds worldwide, you know they are no slouches. Brands like:

All of those have promising labels and superb writers who could bring a CBM with skill–many already have. However, Mark Millar creates with Image Comics. Aside from his work, Image is home to ridiculously cool work like “All Against All,” “Hexware,” “Seven Sons,” and this hellish brand called “Spawn.”

Each time Mark Millar brings one of his creations to life on Netflix, that's a feather in the cap of Image Comics. Several of the publishing houses not named Marvel and DC are heavy hitters already, but they don't carry the cache among the casual CBM fan.

Millarworld on Netflix is doing something about that. His work on the pages of Image Comics is also changing that. Those facts offer objectivity. The comic fandom thoughts are teeming with subjectivity. Regardless, the 2023 slate for Image Comics is about to impress everyone.

Suffice it to say, Image Comics will stand tall in the bronze medal position for the foreseeable future. Bravo to them!

Yet, it all starts with the written word and its accompanying, mind-blowing art. The diversity of this Ambassadors project is a huge high-five for fans clamoring for more inclusion and access worldwide. Millar recruited globally renowned pencillers and illustrators to curate their own saga in the series. From geography to anthropology, culture to race, across the pond or down the street, this crew for “The Ambassadors” speaks for us all.

There is representation there, but more importantly, there is a cavalcade of talent too! When THR asked Millar the genesis of “The Ambassadors,” his answer is as revealing and appealing as you thought it would be:

We’ve seen the three act American superhero origin story a lot over the past 22 years and people are just looking for something a little different now. That’s where the rewards lie and the idea of a super-team based out of Korea just feels fresh. It also gives us an amazing chance to use local talent in these countries and build up the profile of the characters across the world, spinning them off into their own projects and making it an even bigger deal when we bring them back together again. You could only do this thing on a streamer so it totally takes advantage of the format in a way we haven’t seen before.

Seriously, just look at the revealed artwork from Image Comics.

In 2017, when Netflix acquired Millarworld for what has been thought between $30 and $50 million, it was considered “a small deal” but “a big acquisition.” To most comic fans, this didn't make much sense. Aside from the projects mentioned above, this is the same badass nerd who inspired little-known titles like Logan and Captain America: Civil War.

So, yeah, this Mark Millar fellow has some game.

However, The Ambassadors could be another universe on its own because of the global reach of the medium, as the mighty geek scribe shared in the THR exclusive.

One of the great advantages streamers have over cinema is you can do something this mad and ambitious. The domestic audience is usually the main consideration for an American studio, especially opening weekend, so having an entirely non-American cast of characters and exclusively overseas locations would be a hard sell if this was a traditional theatrical release, but I’m just as excited by Korea, India, Brazil, Mexico, Australia and France as I am about the audience in California or New York. It’s also exciting for Netflix as these are all growth markets.

In other words, my dude is about to get paid!

There is no doubt when this concept jumps off the shelves, a TV series adaptation will not be far behind–and can you imagine that cast?! The mere thought of Claudia Kim (Dr. Helen Cho in Avengers: Age of Ultron), Bae Doona (Seo-bi in Netflix's Kingdom), or Jun Ji Hyun (The Girl in My Sassy Girl, Ashin in Kingdom) as the berserk billionaire is fascinating to consider.

You add the international flair of the artists, the quill of Millar, and the backing of Netflix and Image Comics together, and we have plenty of reason to look forward to the future of comics and this outstanding concept. To think, with James Gunn finally restoring the DC Universe, Kevin Feige owning the MCU, and Mark Millar over there at Image, what a fantastic time to be a comic enthusiast, CBM viewer, and righteous nerd.