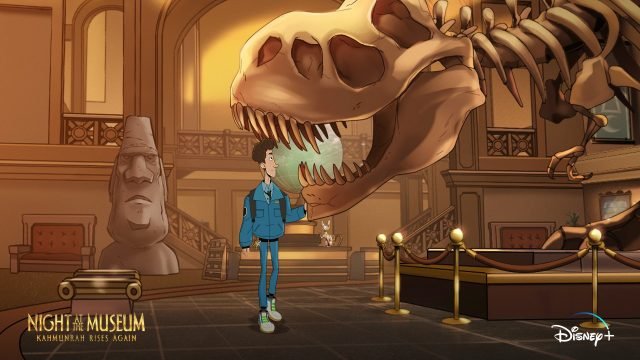 Night at the Museum has been a widely enjoyed franchise from the first film's release back in 2006, to the third and final instalment in 2014. This week, we venture back into the world of Egyptian gods and magic monkeys for another adventure. Kahmunrah Rises Again is a fun, lighthearted piece great for family viewing. You can't beat the live-action, but Matt Danner certainly adds a new layer of fun to the franchise in this new 2D animated feature film on Disney+.

Night at the Museum's Familiar Faces

From the get-go, viewers are bombarded with that nostalgic score which introduces all three previous films. Fans can rejoice as we're reintroduced to the familiar setting of the Natural History Museum. Iconic characters return in an extremely fun fashion and the 2D animation style is a perfect fit adding to the charm of the film. Zachary Levi takes the portrayal of Ben Stiller's Larry Daley. While the demeanour and characteristics are vastly different, we still get the successful portrayal of a worried father from Night at the Museum: Secret of the Tomb.

Joshua Bassett completely nails Nick Daley with that classic teenage awkwardness and allure one would have whilst trying to find their place in the world. There is a compelling lesson for viewers like in all high-quality family viewing. Sometimes, you want to chase your dreams but you're afraid of what others may think. It's tough to chase, however, it's necessary. Night at the Museum: Kahmunrah Rises Again is a classic Disney depiction of following your heart.

There are many revamps of characters from the live-action Night at the Museum movies including Teddy, Attila the Hun, Sacajawea, Laa and Dr. Mcphee. Teddy and Sacajawea keep their sensible heads and good morals while Dr. Mcphee and Laa still hold the comedic relief and hilarious one-liners. Additionally, the new faces consisting of French patron Joan of Arc and the Egyptian god Seth both complement the band of characters nicely.

After his manic appearance in the second Night at the Museum film Battle of the Smithsonian, The Great King of the Great Kings Kahmunrah returns for another selfish quest to reincarnate his army of the underworld. It's a pretty similar scenario just with added comedic elements. The feature emphasizes throughout the hilarious reason why Kahmunrah is seeking revenge on the world. “So this whole thing is because you have daddy issues?” Voice actor Joseph Kamal brings the attitude to the character perfectly.

Learn a Little Something on Disney+

The trilogy has always been full of fun historical easter eggs and facts and Night at the Museum: Kahmunrah Rises is no different. Education and entertainment add to the plethora of reasons this franchise is great for all ages. From insights into ancient Egypt to facts about French legends, this movie has it all. Additionally, one moment in particular even had me researching Theodore Roosevelt and his assassination attempt in 1912. ME! Researching History on my own time! Can you imagine? Many instances leave viewers intrigued and longing to learn more about the characters' pasts.

An honourable mention is the return of classic bromance between Jedediah, Octavius and the show-stealing monkey Dexter. It was both entertaining and fulfilling to see this beloved ensemble of characters back together. Night at the Museum: Kahmunrah Rises Again is a perfect addition to the franchise.

If you want to discuss this more, hit me up on Twitter!