8 Facts We Know About Another Presley Movie, Sofia Coppola’s “Priscilla” 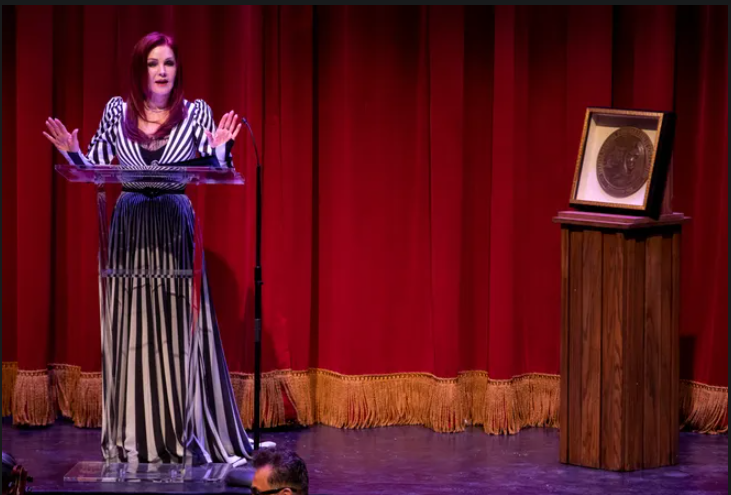 When Austin Butler captivated the country with his portrayal of Elvis Presley, many were left clamoring, “What about Priscilla?” In Baz Luhrmann's avant-garde approach to the sights and sounds of Elvis, we only got a glimpse into Priscilla Presley from Olivia DeJonge (pictured below). She was kind, intriguing, and full of innocence, but it was clear Elvis was in the building and demanded the entire spotlight.

The legacy director proved she doesn't live on Daddy's coattails long ago with her impressive catalog of directorial accomplishments. Since she agreed to take on Priscilla this past September, cinephiles have been curious about her take. Doing a movie about the heartbeat of Elvis Presley's music (and all that entails) will be a substantial undertaking.

For instance, how will Coppola portray the seedy underbelly of a 23-year-old–and oh so famous–man making a move on a 14-year-old girl who was just out of Girl Scout cookie-selling when she bumped into the King?

While Coppola figures out how to navigate the memoir of Priscilla, beginning with those days of borderline illegal intrigue, the legion of fans awaits.

And while we do, here are 8 of the most intriguing facts we know about Priscilla.

But first, a word from our sponsor…

Sofia Coppola is a sucker for a great read.

So much so that she is likely to adapt a screenplay from one, as she has done with The Virgin Suicides (by Jeffrey Eugenides) and The Beguiled (by Thomas P. Cullinan). The Bling Ring was most recently from a Vanity Fair article, “The Suspects Wore Louboutins” (by Nancy Jo Sales).

That's why it's not a surprise following her read of Priscilla Presley's memoir Elvis and Me: The True Story of the Love Between Priscilla Presley and the King of Rock N' Roll, it was announced as a forthcoming movie.

Given Coppola's panache to bring a book into reality, what do you think she'll be able to do when the person who lived that book is sitting next to her? Priscilla promises to be everything Elvis was not–a compelling vantage point of living in the King's shadow.

And since throngs of Elvis Presley fans still think he's alive buying Big Gulps at his local 7-Eleven in Tennessee, don't you know how huge Priscilla will be? Sofia Coppola does. That's why she read the book and is making the movie.

Back to our program…

And, in case you're wondering why you never heard of it, not many people watched it. Joyce Eliason, renowned as a producer for Mulholland Drive, attempted a made-for-TV movie three years after the memoir was published.

Susan Walters was Priscilla. She made her name as Diane Jenkins in “The Young & The Restless,” although wanton nerds may know her as Dr. Carla Tannhauser in CW's The Flash. Dale Midkiff was Elvis Presley, and didn't bare much of a likeness to the King. So, yeah, there's that.

The cast for Priscilla looks promising, beginning with Cailee Spaeny, who is known for taking on challenging roles. From Eleanor Roosevelt in The First Lady, Lyndon in Hulu's Devs, or Jane Ginsburg in On the Basis of Sex, this is a person with some proven skill who should perform well in that role.

As for Elvis, Sofia Coppola got Euphoria's Jacob Elordi. Once “Nate Jacobs” signed, cinephiles stood still. Granted, we're back at the “But they don't look like them” issue. Yet, if those two are any fair warning of what's to come acting-wise, Priscilla means business.

Conversely to Baz Luhrmann's sensationalistic take on Elvis Presley, Priscilla promises to be a slower pace. Coppola shared her biopic will look at the time between her courtship when Elvis was in the U.S. Army through their marriage that ended in 1973. There will probably be a visit into the years following.

Priscilla Beaulieu was only a freshman in high school when she met 23-year-old Elvis Presley at some shindig in 1959. Finally, they married in 1967. A year into the marriage, Lisa Marie was born. Five years later, the couple was divorced. Yet, Priscilla Presley's life consists of decades of memories. And now, fans will have both vantage points.

Graceland is one of the nation's most notable tourist attractions, welcoming more than 500,000 visitors each year, second only to The White House among tourism living spaces. Its home is nestled in Memphis, yet filming for Priscilla is a little north of that. Think Toronto, Ontario, Canada.

Set designers for Priscilla took over The Tamahaac Club, a luxurious and idyllic resort in Ancaster, outside Toronto, as the “new” Graceland. It's been around since 1912, shielded from the proletariat in a secluded forest on the Niagara Escarpment. This will be a cinematic funfest for travel fans everywhere.

Eh, not so much. That's not editorial; that's among TMZ vultures, Canuck paparazzi, and other cell phone journalists. Fans who have seen the first-sight photos of the royal duo haven't been that impressed. To his credit, Austin Butler set a towering standard for Elvis Presley in the movies. And while Olivia DeJonge couldn't develop the same veritas for Priscilla, the jury is still out if Cailee can make the role all hers.

3. A Lover's Tale of Two Elvises

This isn't so much about the movie but rather about the stoic–and often misleading—comparisons between the two actors who have been dubbed as Elvis, but they do have one odd thing in common. They can't help falling in love…with the same woman?!

On the left is Austin Butler, recently as Elvis. On the right is Jacob Elordi, who will be the husband of Priscilla. But in the middle is Kaia Gerber. She's a model who doesn't have a cape, yet there she is. She dated them both, dumped Elordi, and ended up in the arms of Butler. And if the woman looks familiar, imagine Cindy Crawford on her Rooms to Go couch. That's her mama.

P.S. Kaia is in her 20s, and Butler is in his 30s. Does that “May to December” romance sound familiar?

Art imitates life everywhere. First, we have one girl and two Elvises. Next, while Gerber and Elordi were dating, they did the town on Halloween as–you guessed it–Priscilla and Elvis Presley. Well, another coincidence made Sofia Coppola's biopic more fate than an idea. We have already met Kaia. The dusky-hued walking mandible, there is her brother, Presley Gerber. C'mon! You can't make this stuff up!

As we shared previously, Sofia Coppola is quite a bibliophile. While she is an avid reader, she wasn't sold on Elvis and Me at first glance.

I’ve had her memoir for years and remember reading it a long time ago. A friend of mine was talking about her recently, and we got around to discussing the book. I read it again and was really moved by her story.

The director made news recently when she created her profile on Instagram. She has 12 posts, all but one about Priscilla and Elvis. Her first post speaks of her love for the craft and the subject matter. This promises to be what could be her most profitable and award-winning movie yet. We'll see, sometime in 2023.

Priscilla will be Coppola's third film distributed by A24, preceded by On The Rocks and The Bling Ring. Priscilla will be produced by The Apartment, a Fremantle Company, American Zoetrope, and Sony's Stage 6 Films.