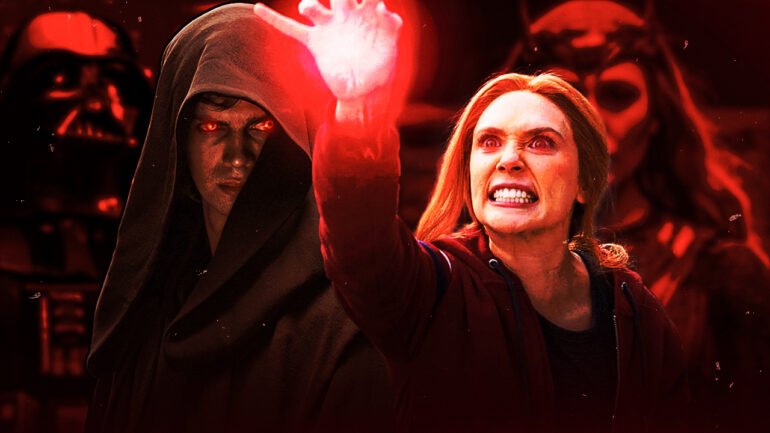 The following article contains spoilers involving Wanda Maximoff from Doctor Strange in the Multiverse of Madness. For more thoughts on the film, make sure to head over to the Agents of Fandom Tik Tok page!

Wanda Maximoff and Anakin Skywalker – The Chosen Ones

Children of destiny, both Wanda Maximoff and Anakin Skywalker were born with the potential for greatness. The Marvel Cinematic Universe’s Scarlet Witch differs from comics, and shares quite a few similarities with Star Wars’ Chosen One. Doctor Strange in the Multiverse of Madness carried us through universes with various Wanda’s, making it clear our Scarlet Witch differed from the rest. The one true chosen one, with a monument etched in the stone of Mt. Wundagore. The Scarlet Witch, a being capable of spontaneous creation, the Chaos Magic within her is unmatched within the Marvel Cinematic Universe.

Anakin Skywalker is no stranger to true power either. The Jedi was conceived from the power of the force. Even Master Jedi Qui-Gon Jin was able to see upon meeting Anakin, that he was bound for greatness. Qui-Gon believed Anakin was a child of prophecy, and the one meant to restore balance to The Force.

Although their experiences differed, both Wanda Maximoff and Anakin Skywalker fell victims to intense childhood trauma. While their upbringings weren’t the same, neither character had things easy. Wanda lost her parents in a war torn country at a very young age. Anakin’s life was no easier, being born into slavery. Both of these children were taken in by groups interested in understanding and cultivating their power.

As Wanda was scooped up and experimented on by the terrorist group known as Hydra, Anakin seemed to be on a brighter path. The Jedi, were of course the peacekeepers of the galaxy. Unfortunately, Anakin fared no better as both longed for something their organizations couldn’t provide them. Both Wanda and Anakin, two beings of immense power, craved love, attachment and companionship.

The Battle of Light and Dark

Throughout their lives, both Anakin and Wanda were plagued by these normal, human emotions. After losing her parents, Wanda found herself volunteering for experiments, eventually leading to the manifestation of her powers. Her one bright light throughout it all, was her brother Pietro. The loss of her brother later in life began a terrible domino effect for Wanda. As Wanda aimed to persevere, she continued to lose her loved ones along the way, being left without anyone who truly cared about her.

While Anakin was surrounded by support, it wasn’t the type he needed. To this day, I maintain that the Jedi had as much impact in Anakin’s turn to the dark side as anyone else. Similar to Wanda, the Jedi lacked Vision. The Jedi Council consistently handled Anakin’s immense power with kid gloves. While Anakin craved love and support, the Jedi’s mantra was to remain unattached. For an emotional and passionate young man like Anakin, these ideals weren’t valid options. Similar to many teachers and parents, the Jedi allowed their lack of willingness to adapt their teaching styles to cost them their relationships. While the Jedi may have believed in their curriculum, a strong teacher adapts to their students. Unfortunately, Anakin Skywalker was driven to the darkness by the same support system intended to keep him in the light.

Both Wanda and Anakin never learned how to properly regulate their emotions. Had they received the support they needed in the past, their grief and pain may not have overcome them in the future. Don’t get me wrong, trauma is no excuse for toxic behavior. However, when one is being manipulated by an evil mastermind or the Book of the Damned, exceptions happen.

As Wanda Maximoff transitioned into the Scarlet Witch, she also gave us an incredible villainous performance in Doctor Strange in the Multiverse of Madness. The film added more context and information to the MCU’s new standout star. The Scarlet Witch is meant to save, or destroy the universe.

Anakin Skywalker too was a child of prophecy. The most gifted force wielder the galaxy had seen, Anakin Skywalker was primed for greatness. Similar to Wanda, Anakin was prophesied to restore balance to the force, as pointed out by Obi-Wan Kenobi in Revenge of the Sith.

Anakin’s story transitions from light to dark. His arc concludes on a sour note, with the death of one being, and the creation of another. The death of Anakin Skywalker became the birth of Darth Vader. Similarly, one could suggest the conclusion of Wandavision mirrored this for Wanda Maximoff. Many viewers didn’t catch it at the time. However, the series finale didn’t only reveal the birth of the Scarlet Witch, but the end of our old Wanda.

Wanda and Anakin both veered back to the light after their paths winded through the darkness. In both of their cases, it took their children to get them there. For Anakin, after years of Vader, it took Princess Leia’s rebellion and Luke’s resilience for him to rediscover the light, prior to his death. In Wanda’s case, her Darkhold-infused rampage through the Multiverse was stopped only by her children’s fearful gaze. Although their darkness afflicted pain, their light lives on through others.

Although Doctor Strange in the Multiverse of Madness may have implied Wanda’s death, we surely haven’t seen the last of the Scarlet Witch. Her last-minute heel turn was Vader-esque, however thankfully unlike Anakin, her story will continue. For more of Anakin’s journey, we’re lucky enough to see glimpses into his past in the upcoming Obi-Wan Kenobi series on Disney+.

Both Anakin Skywalker and Wanda Maximoff share the burden of power and responsibility. Although not always handled with care, both of their stories captivate audiences and have thrust the characters into the forefront of pop culture. So often in fandom we see straight-line stories, intended to show us right and wrong. When diving into the perspectives of Anakin Skywalker and Wanda Maximoff, we learn it’s not always as simple as light and dark.