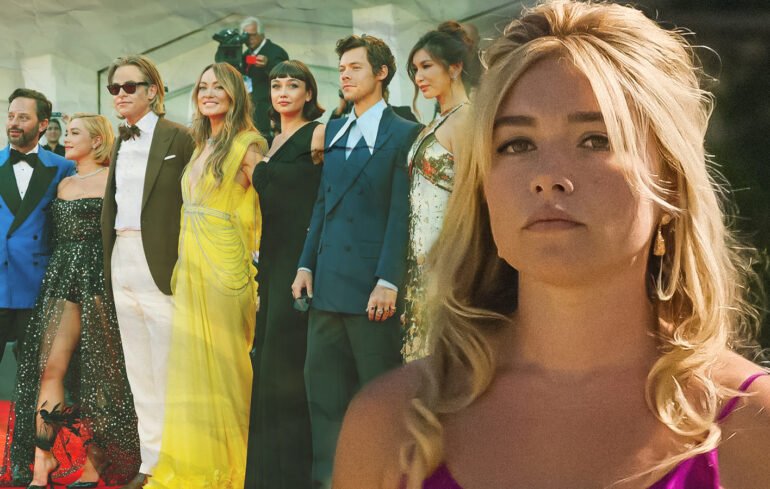 Following her directorial debut in Booksmart, Olivia Wilde has returned to the directorial chair with Don’t Worry Darling. She leads a great cast of Florence Pugh, Harry Styles, Gemma Chan, and Chris Pine. However, even with a talented cast, the story is worrisome and left much to be desired.

From directing a coming-of-age movie with Booksmart, it was interesting to see that Wilde’s next theatrical film would be Don’t Worry Darling, a psychological thriller. They’re definitely different movies from one another in almost every aspect, but I appreciate Olivia Wilde taking on that challenge. The trailers had me interested in this strange world she created. And of course, the talent of Florence Pugh sold me on the movie.

Don’t Worry Darling follows Alice (Florence Pugh) and Jack Chambers (Harry Styles), who live in this picturesque town called Victory. The women are all housewives while most of the men work at a facility headed up by Frank (Chris Pine), the town’s leader and founder. After seeing one of her neighbours, Margaret (KiKi Layne), act strangely, Alice notices that the town may not be the perfect place she hoped it would be.

The cinematography of Don’t Worry Darling by Matthew Libatique, a Filipino-American, along with the sound design and score by John Powell help establish an unsettling tone for the movie that’ll leave audiences uncomfortable. It’s a nice contrast to the bright and happy town of Victory. Although I don’t believe the movie says outright when it takes place, it feels like the 1950s with the technology, costuming, and set design. All of these aspects of the film are done well.

Despite the positives, it was hard to fully immerse myself in Don’t Worry Darling. The runtime is about 2 hours long, but I wish we had more time to explore Victory and what life was like for the people. Unfortunately, the script makes us question the town’s motives too early before allowing us to imagine living there.

Down the Rabbit Hole

I found myself intrigued by the mystery surrounding Victory. I would analyze what was being shown and said to figure out if there were any hints given by the symbolism or motifs. Features I found interesting were the character names, Alice and Bunny (Olivia Wilde). Similar to the story Alice in Wonderland, we see Don’t Worry Darling‘s Alice fall down this rabbit hole and discover something strange.

Unfortunately, the third act of Don’t Worry Darling is rushed and doesn’t quite leave a satisfying ending. I wish the clues leading up to the reveal were more spread out to properly build it up. Maybe with a second viewing I’ll be able to notice more hints early on. The movie is very on the nose with what it’s trying to tell audiences, so I wish it could’ve been more subtle. However, considering what the message is, some people may need it shoved in their faces to really understand it.

There is absolutely no question about how fantastic Florence Pugh’s performance was in Don’t Worry Darling. Seeing her journey as Alice throughout the movie was captivating. She displays her range of emotions, and you sympathize with her at every turn. Besides the technical aspects, she really amplifies the movie. One of the best interactions in the movie is between her character and Chris Pine’s. The way they bounce off each other is like watching a tennis match. This might be one of Pine’s more interesting roles for me, and I wish we got to see more of his character.

When playing a role across from Florence Pugh, it’s easy to notice that Harry Styles is not on the same level as her as an actor. Thankfully, there are later scenes in the movie that show off his potential. Like Jack and Harry, we don’t get enough time with the other characters in the town. I found myself wanting to learn more about them and understand their motivations.

Don’t Worry Darling was an ambitious jump for Olivia Wilde from Booksmart, but doesn’t stick the landing. There are still some unanswered questions and plot holes that don’t fit the film’s explanations. But that doesn’t stop me from recommending those interested to check it out. The film is definitely a talking point, whether you’ve seen it or just follow the drama behind it.

I’m personally planning to watch it again to see if my gripes with the movie are lessened on a second viewing. The performances by the cast, the visuals, sound design, and the score make Don’t Worry Darling worth seeing.

Let me know your thoughts on the movie on Twitter, and check out other reviews of the latest movies and shows here on Agents of Fandom!