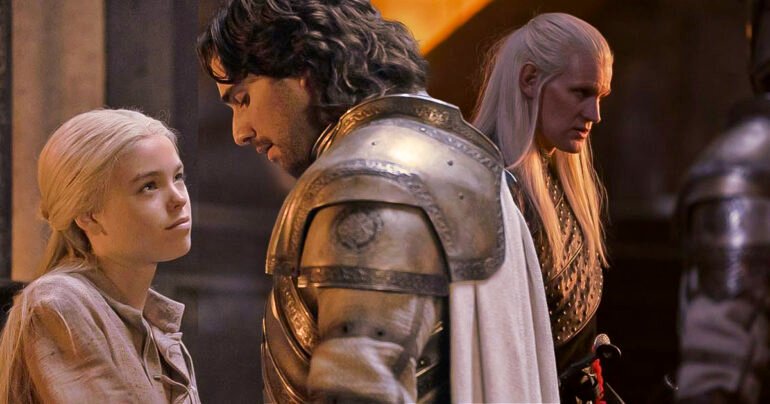 HOTD Mid-Season Review: Chaos in the House of Dragon

We have made it to the mid-point of HOTD and things are more chaotic than ever! With Rhaenyra’s wedding to Laenor rapidly approaching, things start to pick up in Westeros, resulting in the best episode of the season so far!

Tension in the Castle

Following last week’s eventful episode of HOTD, Rhaenyra Targaryen (Millie Alcock) was given some pregnancy prevention tea (Plan Tea if you will). At this point, she was set to marry the son of the Sea Snake, Laenor Velaryon (Theo Nate), after an arrangement between their respective Houses. They both quickly decided it would be an open marriage due to their attraction to other people. This leads us to one of the key players in this episode. That being Ser Criston Cole (Fabien Frankel), who has a lot on his mind.

Last week’s relations with Rhaenyra broke his oath of celibacy that comes with being in the King’s Guard and Cole decided he wanted to run away with Rhaenyra. However, Rhaenyra had other plans and their discussion caused a moment of tension between the two, leaving Cole frustrated. Later in the episode, he reveals his affair with Rhaenyra to Alicent (Emily Carey). Cole then gets involved in more drama at Rhaenyra and Laenor’s wedding. After Joffrey Lonmouth (Solly McLeod), Laenor’s love interest, makes a comment about Rhaenyra, Cole brutally kills him. Cole’s anger is intense and almost results in his suicide before he was stopped by Alicent. Based on reactions on Twitter, Ser Criston Cole isn’t very popular among fans anymore, and that is completely understandable. His actions in this episode were very questionable, and his arc will be interesting moving forward.

Someone else who’s been causing chaos, as usual, is Daemon Targaryen (Matt Smith). On a mission to marry Rhaenyra, Daemon brutally kills his former wife, Lady Rhea, at the beginning of the episode. Later, he crashes Rhaenyra’s wedding and ends up kissing her. However, by the end of the episode, he’s with another girl – Laena Velyaron (Savannah Steyn), the daughter of the Sea Snake. Clearly, HOTD has shown Daemon gets around, but it will be interesting to see who ends up sticking with him in the coming weeks.

Throughout our HOTD viewing experience this week, he wasn’t the only one making headlines this week. As always, Millie Alcock steals the show. With this being Millie Alcock and Emily Carey’s last episode, it’s important to talk about how well they did in this series. This was Millie Alcock’s first big role, and she has easily been the best thing to come from these first five episodes. Seeming to have chemistry with everyone in the cast, she stole the scenes she was in. As for Carey, it’s much of the same. Carey really came into her own in these past two episodes, and she was phenomenal when she got the chance to shine. With Olivia Cooke (Alicent) and Emma D’arcy (Rhaenyra) stepping into the roles for the rest of the season, it’ll be fun to see how they fit into the characters introduced by Alcock and Carey.

Overall, this episode was the best of HOTD so far. It had great character moments, intense sequences, and a Game of Thrones wedding (fans of the original series know how that usually goes). This created memorable moments throughout the episode, setting up stories for weeks to come. One of those moments being Alicent’s entrance into the wedding. Entering dressed in green means she’s ready for war. This sets up an intense moment between her and Rhaenyra which teases the story ahead.

Along with her questionable relationship with Daemon, Rhaenyra seems to be in conflict in several of her other relationships, including the one with her father. However, something the House of the Dragon audience has noticed is that the health of the king is not good and it feels like he could die at any moment, which is something the show teases on multiple occasions in this episode. This creates a lot of tension because we know that when he dies, chaos will ensue when Rhaenyra takes the throne.

So far, House of the Dragon is a great addition to the Game of Thrones universe, and possibly even the better show. It’s given us new characters to love or hate, exciting stories to get invested in, and of course DRAGONS!! With five more weeks to go, it should be fun to see how this season sticks the landing.

What did you think of the first half of the HOTD season, and who do you want to see in the second half? Let me know on Twitter and check out my other articles here on Agents of Fandom!