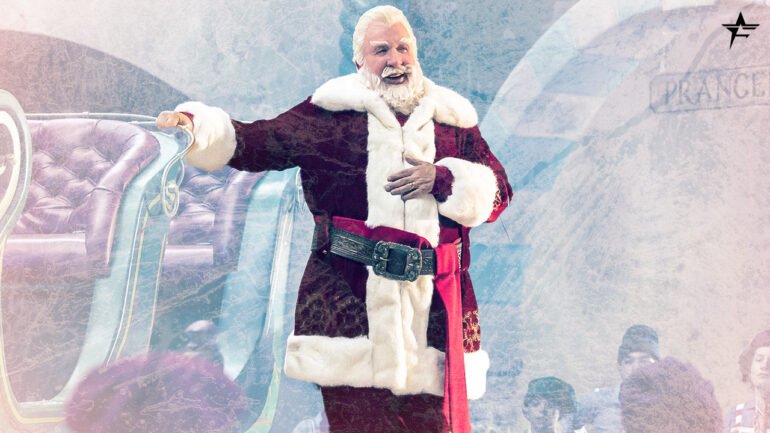 Tim Allen is a complicated figure.

For most of the 1990s, he was Tim “the Tool Man” Taylor, caveman-grunting for 200+ episodes on Home Improvement. Since 1995, he’s been the voice of Buzz Lightyear, a character so iconic that Pixar has kicked off the in-universe film franchise for which Allen’s character was an action figure (Cue the Inception music). And from the mid-90s to the mid-00s, Allen was the Jolly One himself, playing single dad-turned-Father-Christmas in The Santa Clause. There were three Santa Clause films, and despite their diminishing returns, all are aggressively watchable, in large part because of Tim Allen’s midwestern, working-class brand. It’s overselling it to say he was America’s Dad in the 90s, but there are only a handful of actors who could’ve sold The Santa Clause to children back then, and Tim Allen is one of them.

By the 2010s, in the wake of advances in political correctness, Allen found himself a dying breed of comic. His once trademark everyman persona was becoming increasingly alien to younger generations. To his credit, he seized on the opportunity to create television for people-who-don’t-understand-why-they-can’t-say-the-N-word with 194 episodes of Last Man Standing. LMS was a sort of older, angrier remix of the Home Improvement formula. Unlike Home Improvement, Allen’s politics were often front-and-center in Last Man. That series ran for a decade across two networks, which is no doubt a great accomplishment. Very few actors can boast that they led a sitcom as successful as Last Man Standing. For Allen, it’s not even his most successful venture. Without a doubt, Tim Allen belongs in the conversation for the Sitcom Actors Hall-of-Fame.

Today, however, you’re more likely to see the Tool Man littering Twitter with cringe-inducing right-wing zingers than you are to see him headlining a major motion picture or even another three-camera sitcom. Tool Man indeed.

Enter The Santa Clauses, the new limited series from Disney+ that finds Allen’s Scott Calvin/Santa Claus, now 65-years old, as he considers retiring from the gift-giving game and finding a replacement.

It’s fitting that Clauses centers on the search for a new Santa as the current one considers hanging it up, because it’s evident through the first two episodes that Allen is struggling to muster up the enthusiasm for the role. The Santa Clause worked because Tim Allen was delivering comedy for the grown-ups while the kids were enchanted by elves and the North Pole. This iteration is facsimile of a facsimile. The elves aren’t as charming, the jokes are tired, and the adults look weary of all of it.

And then there’s the Tim Allen of it all. It’s unfortunate to report that some of Allen’s politics come across in jokes that are forced and hacky. Lowkey “War on Christmas” energy.

The series makes a few attempts at appealing to the audience’s nostalgia. Sadly, callbacks to the original film come off as either forced or clumsy or both. Shows like Cobra Kai came out of the gate with the wisdom that nostalgia itself isn’t a replacement for a compelling story and smart writing. Clauses seems destined to learn that lesson the hard way.

In a six-episode series, it’s a rough look for the first two episodes to lack so much luster. Assuming it stays the course, The Santa Clauses is the weakest installment of the franchise by a fairly wide margin. If this is indeed Tim Allen’s swan song, it’s a sad note to go out on.

The first two episodes of The Santa Clauses debut on Disney+ November 16th.

Check out our reviews of Zootopia+ and Black Panther: Wakanda Forever!