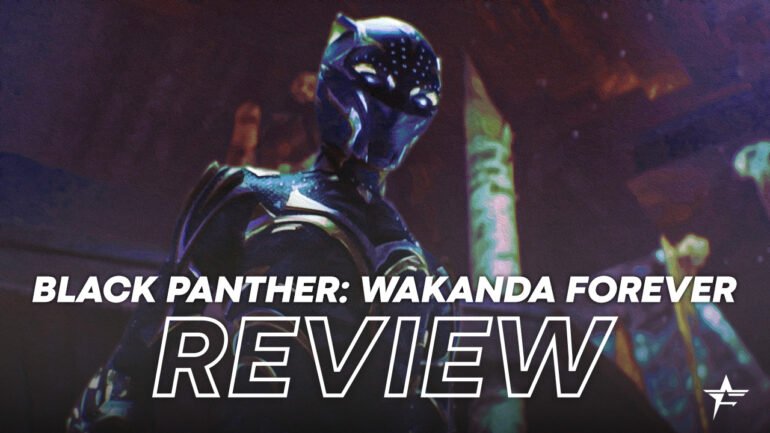 Black Panther: Wakanda Forever reaches far beyond the parameters of a screen. It reaches far beyond a story read in the pages of a comic book. It is the culmination of a legacy. Finding the right words to dedicate to this film took a lot of internal reflection and thought probing. I can only hope I do it justice.

The Legacy Of The Black Panther Continues

The two stand out performances in the film are undoubtedly that of Letitia Wright and Angela Bassett. Together, it was their duty to unify and protect a nation which lost their greatest leader and protector. While threats from the outside world apply dangerous amounts of pressure, Shuri and the Queen are tested in ways that shape the very foundation of their leadership. With the help of M’Baku (Winston Duke), Nakia (Lupita Nyong’o), the Dora Milaje, and Riri Williams (Dominique Thorne), there is nothing that can destroy Wakanda, a nation built upon the most powerful resource on Earth: love. Love for your people – for your home – will make one go to extreme lengths to preserve its safety.

This same mentality is what introduces us to the most memorable villain of Phase 4. His people often refer to him as K’uk’ulkan, the Mesoamerican serpent deity. We know him as Namór the Sub-Mariner, a mutant with the ability to swim the seas and fly the skies.

The Rise Of The Sub-Mariner

There is something so charismatic and passionate about Namór (Tenoch Huerta), so much so that it takes a second to decide whether he is truly a villain. He’s the type of character that raises internal discussions of how anyone would react in his position. Having seen his home and what he was fighting for, it’s not hard to feel empathy towards his cause, regardless of his actions. The dynamic between Namór and Shuri is unique, and allows for each of these leaders to come into their own. There is mutual understanding between them, as guiding lights for their people, and two individuals who have suffered a great deal of loss in their lifetime. The anticipation of seeing these two fight side by side in the future will sit strongly in the hearts of marvel fandom.

The Debut of Ironheart

The anticipation for the future does not stop there, as the debut of Ironheart will resonate with audiences everywhere. The sisterly dynamic between Shuri and Riri is such a payoff, as two young geniuses with the world at their fingertips. Ironheart has the potential to become a fearless leader, like the man in metal before her, and rises to the occasion in Wakanda’s time of need. Although her time in the Ironheart suit is brief, the requirement to don the armor once more will come again soon, and she will be more than ready when it does.

Now It’s Time To Address The Elephant In The Room

Black Panther: Wakanda Forever is a love letter written to the man who kicked all of this off. Chadwick Boseman’s presence is felt within the very fibers of this film, silently guiding our heroes in their darkest hour. Wakanda Forever is a reminder that loved ones lost are with us always, regardless of the way grief affects our souls. Whether it’s Nakia running away, Queen Ramonda moving forward, or Shuri unable to let go, T’Challa’s comforting presence never leaves their corner. The most empowering part of this film is the way these emotions can be translated into our new reality.

How do we press forward in the wake of unexpected tragedy? How do we allow ourselves to grieve without succumbing to the inevitable anger and guilt that comes with it? Ryan Coogler understood what it meant to lead strongly in a time of need. He, and the cast of Wakanda Forever, moved with purpose and unwavering intent. As a unified front, they not only persevered in the face of darkness, they provided closure for an entire fandom.

Have you ever heard the saying, “heroes are remembered, but legends never die”? Chadwick Boseman, our Black Panther and King of Wakanda, a man of nobility, patience, and discipline, was put to rest in the most endearing way through this film. But his memory lives on in the hearts of these characters and in the hearts of audiences around the world. Even after passing, Boseman continues to shape an entire generation, changing the lives of many, including mine and those at Agents of Fandom. Thank you to everyone involved in making Black Panther: Wakanda Forever as special as it is. The soils are now seeded to grow something new in the legacy Chadwick Boseman left for us.