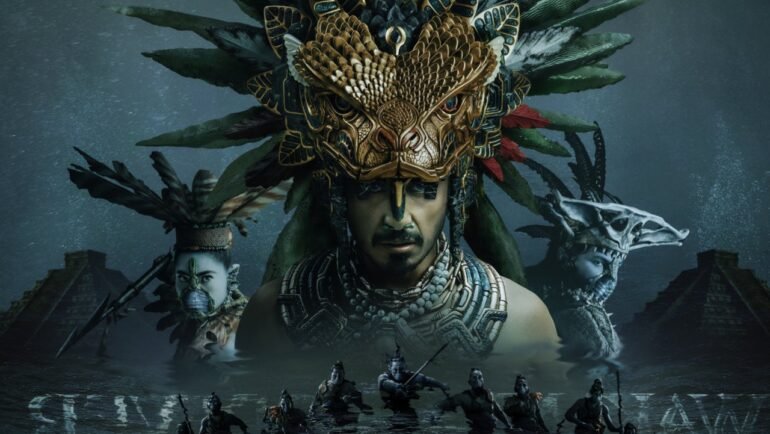 A Dive into the Secret Behind Namor’s Talokan Heritage

If you have seen Black Panther: Wakanda Forever, you saw something that may still have you guessing, “What’s with Namor’s Talokan heritage?” Inside Marvel Comics, Namor was a polarizing dude. The expression on his face looked like…well, that someone farted. Those eyebrows were five feet off his forehead!

Then, we have Namor’s drip. He wore a Speedo! The Sub-Mariner goes for a swim in the Atlantic, walks up to the shore, and it looks like he has a hamster hiding in his shorts. That was Namor!

Speedo or not, “surprise eyebrows” or not, that was “Marvel’s King of Atlantis.” Keep that in mind because we went to the movies to behold Black Panther: Wakanda Forever…and that wasn’t Namor. No more Atlantis. Welcome to the Yucatán Peninsula. Suddenly, we are confronted with another world. He was now “Na-MOR!” Wait, what?!

Yeah. And it was genius!

So Namor’s Talokan Heritage Means He’s Not from Atlantis?

There’s no denying the magnum force Tenoch Huerta Mejía brought to the Black Panther sequel. He commanded attention in every scene. From bringing people on a scenic tour of his homeland, or intimidating people with a grueling threat to someone else’s, the King of the Underwater world was impressive.

But what’s with all the feathers and why did the language sound like a trip to the Mexican Rivera?! Well, that can be answered with one line from M’Baku (Winston Duke) as he shares in Black Panther: Wakanda Forever.

His people do not call him ‘General’ or ‘King.’ They call him K’uk’ulkan: The feathered serpent god.

Although the evolution of Namor’s Talokan heritage was in the news for a minute, there were still many MCU fans who weren’t aware of the culture switch nor prepared to answer the obvious conflict:

Isn’t there already a King of Atlantis?

Absolutely. Therein lies the problem. It’s no secret that Marvel and DC comic books pilfered from each other’s IP. It’s like there was a garage sale each year and comic book spies raided character development for “inspiration.”

I mean, there are:

Originally, Namor the Sub-Mariner was set to be the Marvel King from Atlantis, but more than $1 billion later, Kevin Feige knew he had to escape the endless comparisons. Jason Momoa was powerful as the man who would be king. Everyone knew it, so Feige determined not to compete–but to change. Somehow, Marvel Studios would have to tweak canon, risk butthurt fandom, and make Namor stand, not only apart, but stand alone.

Ryan Coogler went deep to make his King of Atlantis an individual, so they reinvented him and pulled up gold.

The Buried Treasure from Talokan

Changing Namor’s culture to Mesoamerican created a reward greater than the risk. It unveiled a whole new world with countless directions to take Tenoch Huerta Mejía’s character. His persuasive mystique made this film possible. It was necessary for Coogler to remove all obstacles and allow fans to become submerged in the story and tribute to Chadwick Boseman.

However, the story of Namor’s Talokan heritage isn’t entirely concocted from the ether. The rich history of Mesoamerican culture allowed Coogler, Feige, and the rest of Marvel Studios to start from scratch. Atlantis is not a part of the movie or the MCU. Rather, it is the looming shadow of Aztec folklore about Tlālōcān and its fabled “rain god” Tlāloc.

All imagination is rooted in reality. In a fascinating article from Smithsonian (linked above), we learn about what inspired Talokan from an archaeologist and ethnohistorian, Kurly Tiapoyawa.

Based on his expert and ingenious studies, we know the following about the MCU version of Namor:

Tiapowaya further explains a possible connection between Atlantis and Talokan because of a man named Ignatius L. Donnelly, who believed Atlantis was real!

In [Donnelly’s book Atlantis: The Antediluvian World], the fringe politician argued that Atlantis was a real civilization that passed its knowledge on to later cultures, including the Maya and the Egyptians. This version of events looked overwhelmingly like the story of colonialism, in which white Europeans supposedly “civilized” the rest of the world.

Does any of that sound or look familiar? If you saw Black Panther: Wakanda Forever, you know it should.

As Phase Four closes and Phase Five opens a new chapter, we should be confident in one thing — the MCU is committed to a more diverse and inclusive comic universe. Look no further than the Eternals. Gender to race, disability to identity, it’s all there. It even boasts the MCU’s first Asian director (Chloé Zhao).

And, as we saw in Black Panther: Wakanda Forever, we know Feige is committed to making his cinematic universe look more like the world. The venerable names of Marvel Comics’ past–Stan Lee, Jack Kirby, George Perez, Steve Ditko, Gene Colan–weren’t shy about a psychedelic franchise. Fortunately, neither is Marvel Studios. And, Warner Bros. for that matter.

Yet, the Mesoamerican touch with Namor’s Talokan heritage was a master stroke.

Their commitment to putting Namor’s Talokan heritage was on full display. People of Mesoamerican ancestry should walk out of a theater with their heads high, shoulders back, and hearts teeming with pride. It was a visually stunning film, and it wouldn’t have been possible without everything Ryan Coogler’s team learned about Aztecs, Mayans, and the rainbow of culture from Middle America.

Even the hand gesture was authentic!

History led the filmmaking. Marvel considered it all, from the historical etymology of the Talokan language to its Mesoamerican influences and even how their skin turned blue. (Okay. That last part may not be historical.) Thanks to their superb work, we are introduced to an entirely new culture in the MCU.

Yes, it’s another door Marvel can walk through, but it’s also another world we must discover.