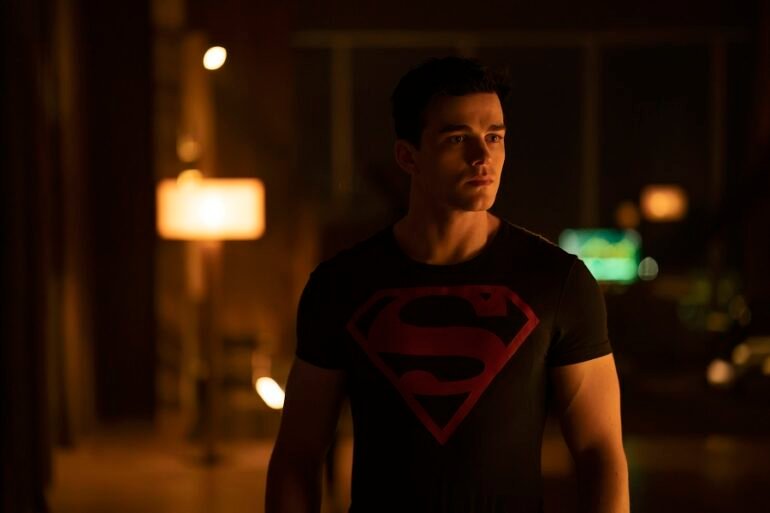 Titans is back on HBO Max with its fourth season. With the Titans celebrating their victory over Scarecrow at the end of last season, Dick Grayson (Brenton Thwaites) receives a call from Bruce Wayne with a message to head over to S.T.A.R Labs in Metropolis. It’s time. The day Superman can finally meet Conner Kent (Joshua Orpin) is here. Upon arrival, Superman is off-world on superhero duty. However, Clark still promises a meeting with Connor soon. While trying to flee the city, Lex Luthor (Titus Welliver) sends an invitation to Conner via a psychic electromagnetic wave that affects all the technology in the vehicle. Lex wants to meet Conner at LexCorp. Dick tries to talk Conner out of it, letting him know that Lex is the one man that Bruce Wayne was ever afraid of. However, Conner is set on meeting at least one of his “parents”.

When Conner arrives at LexCorp, Lex confesses that he is dying and would like Conner to stay with him. Conner tries to provide a solution by offering his DNA, but Lex has already explored that option, and it has not worked. As he explains to Conner, Lex knows that he can never be Superman, so he creates Conner in the hopes his dream can become a reality.

Lex Luthor knew his master plan would lead to him having a son with his brains. Additionally, his offspring would be conceived with the powers of Superman. Conner decides to stay with Lex, despite his teammates’ better judgment. As Lex is about to bring up a project that he is working on, he starts coughing and vomiting blood. Disgustingly, a giant snake makes its way out of his mouth (if that’s not proof of villainy, I don’t know what is).

Back with the Titans, Rachel (Teagan Croft), feels the effects of whatever is happening to Lex. She begins screaming uncontrollably until Conner manages to destroy the snake. With Lex now dead, security and SWAT rushes in and Conner is present at the scene of the crime. Conner is arrested, and the camera pans to the street outside, where Ms. Bennett – the woman that Lex fires at the beginning of the episode – smiles while looking on.

Elsewhere in the episode, we meet Sebastian Blood (Joseph Morgan) who seems to be a tech inventor of sorts teasing the inevitability of the villain “Brother Blood”.

Hour 2 starts with another brutal murder. A hooded figure with a mask appears in a house while a husband and wife are having a conversation. The windows start to be covered in blood. Once the wife spots the masked figure, she alerts her husband. The masked figure paralyzes him so he is unable to move, and proceeds to murder his wife. Upstairs their daughter hears all the commotion. Although she tries to find out what has happened, the masked figure comes for her as well, with screams ringing out as the scene ends.

Conner is now in a detention facility after being arrested for the murder of Lex Luthor. Dick and Kory (Anna Diop) assure Conner that they will find evidence and get him out soon. Conner tells them that he has never seen power like that before.

Kory heads to Lex’s mansion, meeting Nelson Blake, who tells her that Lex’s inner circle died that night along with him. Nelson is the only one who is still alive. Blake lets Kory know that Lex was studying her, well before affiliating himself with other cultists. As he says this, he starts hearing chanting and starts bleeding from the mouth, just as Lex did. A snake exits his mouth and Kory destroys it.

While searching LexCorp, Rachel gets a vision of the murder house from earlier in the episode. The team heads over and Rachel finds the body of the dead mother. They head upstairs and the daughter is still alive but in a nightmare. Rachel finds a way to help her by going into the hellish dream world, where she sees the hooded figure that murdered the girl’s mother. Raven saves the day, protecting the mysterious girl revealed to be Aria.

The Titans Are Back

The Titans head over to an abandoned slaughterhouse, where they find several victims whose blood is being drained. The victims include Aria’s father, who is still alive. Raven runs into the masked figure once more and after a skirmish she defeats him, removing his mask. Unfortunately, the mystery figure goes up in flames before his identity is revealed.

The team finds information that Lex’s physician, Arthur Holmwood, wanted whatever power Lex was after, for himself. The murder is then pinned on Arthur, and Conner is freed from the holding facility. When on their way out of Metropolis, they finally meet Mother Mayhem – Ms. Bennett that we meet earlier – who is causing havoc with her red lightning. The Titans try taking her on, but she gets through them quite easily until Starfire manages to force her to retreat. Her attacks seemed to have an effect on Raven, as her gemstone disappears, and her hair turns white.

In the final scene of the episode, Mother Mayhem returns to The Church of Blood. All her followers are chanting and there is a huge pool of blood in the center. The scene cuts to Sebastian sitting at his desk, his coffee turning into blood and the mug overflowing as he hears the chants from the followers.

Things You May Have Missed

The Temple of Azarath – This is the place in episode 1 where Lex Luthor fires Ms. Bennett after having no use for her anymore. Lex wants to use the temple to cure his sickness. In the comics, the temple is actually a city. This is where the people of Azarath lived. Raven was born and raised here, and her mother Arella stayed here as well.

Bernard Fitzmarten – The scientist that we meet at S.T.A.R Labs is based on a character from the comics called Bernard Dowd. Bernard and Tim Drake (Jay Lycurgo) become close friends and eventually end up dating. We get to see some seeds planted in episode 1, so let’s hope their relationship is explored in episodes to come.

White Raven – At the end of episode 2, Raven is seen with white hair. This could be a call back to the White Raven arc in the Teen Titans animated series. White Raven is Raven’s most powerful version of herself, portrayed as her inner purity against the consuming evil of her father.

Check out the Agents of Fandom on Youtube, Twitch and wherever you get your podcasts!