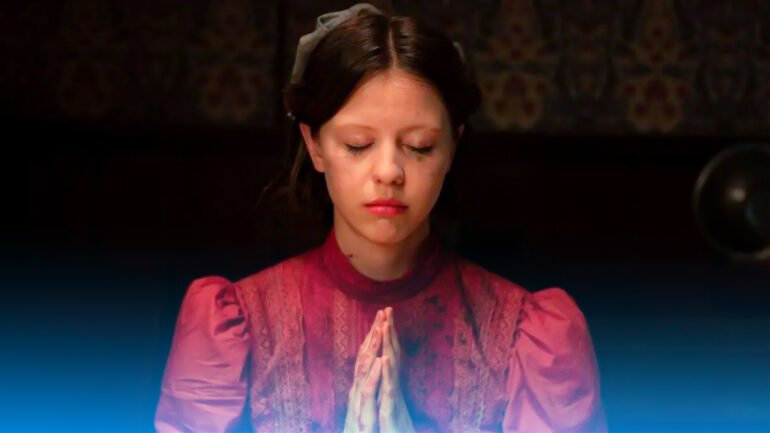 September 16th began the nationwide release of Ti West’s much-anticipated prequel to his well-received hit, X. Pearl does an extraordinary job of mixing whimsy and bloodlust. While this movie is classified as a psychological thriller, compared to X, Pearl also includes themes of modern day feminism, generational trauma, and navigating life in a pandemic.

The opening scene follows Pearl, played by horror goddess Mia Goth, in her day-to-day life on the isolated farm in 1918. At this time, her husband, Howard, is serving overseas during the first World War. This leaves Pearl alone with her overbearing mother to help care for her ailing father. Her only friends are the barnyard animals, and, oh, an alligator named Theda. Just don’t expect a homicidal Dorothy to show up until later. Pearl is a slow burn at first, focusing on the precocious innocence of a sheltered young woman. Comparisons to The Wizard of Oz are obvious, along with the Sirk-inspired use of Technicolor. Although let’s not discount the influence of Alfred Hitchcock’s 1960s classic, Psycho. The theme of a soul trapped in a life that never truly feels like their own connects the stories of Pearl and Norman Bates.

Looking for any excuse to get away from the farm, Pearl heads to the pharmacy in town to pick up her father’s morphine medicine. Instead of going straight home after, however, she decides to stay and watch a movie, “Palace Follies,” which is a fictional feature of chorus dancers. She’s captivated by the dancers, and hopes to one day leave the farm life to be famous like them. Upon leaving the theater, Pearl runs into the projectionist (David Corenswet). She’s immediately smitten, the thrill and guilt of infidelity rattling her. Missing Howard more than ever and needing a friend, she sneaks out later to see the projectionist. He ends up showing her an explicit movie he found during his stationed time in Europe. Instead of being repulsed by the on-screen sex, Pearl inquires about the movie, asking if this is a legal activity. Her concern wanes when he explains the contrast of artistic expression in Europe compared to America.

Howard’s sister, Mitzy (Emma Jenkins-Purro) then shows up in her Sunday best, looking like Ginger Grant to Pearl’s Mary Ann, fox stole and all. In a hushed conversation, she reveals the church is holding auditions for a traveling dance troupe. Suddenly, Pearl envisions herself joining the chorus for a seven-city tour and ultimately making it big. She resorts to practice in secret, due to her mother’s dismay for anything besides taking care of the farm and Pearl’s father.

Her mother, Ruth (Tandi Wright) continues to push her disapproval of Pearl’s desire to be a famous dancer. She insists her daughter is selfish for putting her aspirations before her responsibilities. As their argument intensifies, those who have seen X may recognize a pattern in this speech Ruth gives Pearl. Disapproval aside, Ruth’s point of view stems from her own life experience of giving up her dreams in order to take care of her husband. Without Pearl’s assistance, Ruth would have no reprieve from playing mother and nurse. But she also accepts life for what it is and demands Pearl do the same.

Pearl’s dream shatters further when she is rejected from the dance troupe. Not because she’s not talented, but she simply isn’t what they were looking for in a dancer. The judges desire a youthful, All-American blonde girl, and she recognizes who they are referring to: the one who came from a good, well-off family, and who always seems to get what she wants. Someone Pearl would be reminded of later that represents everything she views as injustice for not having what Mitzy has.

An inconsolable Pearl sobs in front of the church as her sister-in-law offers to take her home. Mind you, before the audition, Pearl committed two and a half homicides at the farm. Pearl and Mitzy sit across from one another, an undeniable tension building as she vents to Mitzy. Pearl begins to admit she hates Howard for leaving her and she is speaking as if she’s talking to Howard himself, rather than her sister-in-law. This monologue is where Goth radiates with brutal force, toeing the line between being unbalanced and certainty that there lies something wrong within her. She maintains a unique ability, as Pearl, to draw in an audience while simultaneously repelling them, all while tugging at heartstrings.

Pearl shows that beyond the bloodbath, the true horror lies in human nature when someone is backed into a life they didn’t necessarily create for themselves. Psycho may have motivated this psychological ride, but Pearl goes a step above by diving into a deep spiral of desperation and self fulfilling prophecies in a deeply moving manner.

Pearl’s complex humanity grounded by Goth’s breathtaking performance unlocks a relatable experience, murderous tendencies aside. After all, she’s a victim of her circumstances, like her mother before her. We almost want to see her win, but by the end of X, Maxine rightfully halts Pearl’s taste for revenge. It’s still a pleasant descent into madness through and through.

Be sure to catch Pearl now playing in theaters nationwide!