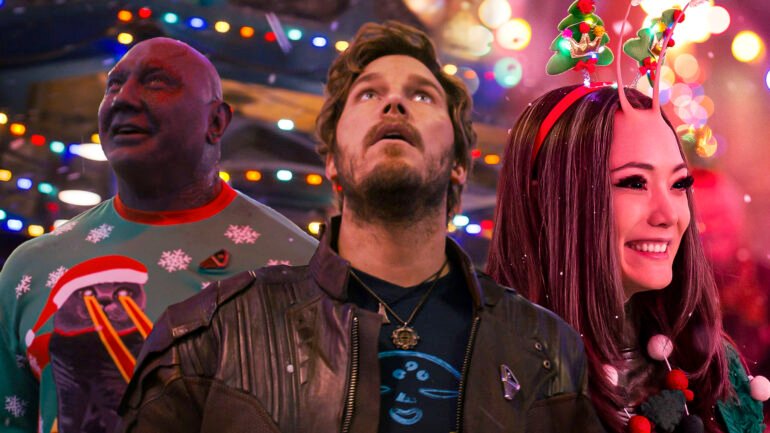 Guardians of the Galaxy Holiday Special – A New Holiday Tradition

When The Guardians of the Galaxy Holiday Special was announced in 2020, the hype levels were through the roof. The MCU first dipped its toes into Christmas content with last year’s Hawkeye. Finally, The Guardians of the Galaxy Holiday Special is here. This special stays on brand with traditional goofy James Gunn vibes and goes all the way in on the Christmas aesthetic. Filled with an abundance of humor and heart, this Marvel Studios Special Presentation is one of the best projects of 2022. Frankly, it’s instantly a brand-new holiday tradition.

The story follows the Guardians, fresh off the events of Avengers: Endgame and Thor Love and Thunder, as they try to work together to cheer up Peter Quill (Chris Pratt). The goal? To give him the Christmas of a lifetime. This story full of holiday cheer works to near perfection. In classic Guardians of the Galaxy form, the crew provides us with some of the funniest moments in the MCU. Also staying on brand, we receive some very emotional, tear-worthy moments as well.

A significant amount of emotion came from our resident Empath. Pom Klementieff delivers her best performance as Mantis in the MCU to date. Her comedic timing and chemistry with Drax (Dave Bautista) through their adventures in LA are near perfection. The duo create many memorable moments we’re sure to talk about for the holidays to come. Even though Klementieff easily steals the show, the whole crew really is fantastic. It feels like the Guardians’ chemistry we haven’t seen since 2018’s Avengers Infinity War. The Guardians of the Galaxy are back and better than ever.

Not that we are surprised, but The Guardians of the Galaxy Holiday Special is accompanied by one of the best soundtracks ever to grace a Christmas project. The music not only fits the vibe we’ve grown accustomed to with the Guardians, but also enhances the emotions and unique holiday spirit of each scene. Composer John Murphy is no stranger to working with James Gunn, as they collaborated on last year’s The Suicide Squad. We’ve come accustomed to great music when paired with Gunn projects. It seems James has mastered how to use music across film and TV, as he always knocks it out of the park.

Going into this special, Gunn had teased introducing “One of the greatest MCU characters of all time“. As revealed in the first trailer for the special, that character is none other than Kevin Bacon! Bacon’s role in the special is as hilarious as it is poetic. His inclusion is a home run from Gunn. Bacon was first mentioned in the first Guardians of the Galaxy film. All the way to 2018’s Infinity War, Kevin Bacon has seemed to find himself as a part of the Guardians’ story, without ever being personally present. Finally, seeing him there with the Guardians and interacting feels so right. Bacon brought easily the best celebrity MCU appearance to date. Here’s to hoping we get another cameo down the road.

A Holiday Celebration For The Whole Galaxy